Fernando Alonso was handed a heavy time penalty following a Haas protest into the state of his Alpine during the United States Grand Prix.

Haas lodged protests against both Alpine and Red Bull for Alonso and Sergio Perez respectively as both cars carried damage at various points of the race that saw debris fall off on the long straight before Turn 12. Perez’s damage was sustained in opening-lap contact with Valtteri Bottas and led to his front wing endplate flapping for five laps until it flew off when he was overtaking Lance Stroll.

Stroll was again involved in the scary collision that damaged Alonso’s car, with the Alpine suffering a broken right-hand wing mirror that eventually failed over 20 laps later.

While the stewards dismissed the protest against Red Bull given the fact Perez had not been called into the pits before the part fell off – and that the car was not unsafe afterwards – it agreed with Haas that Alonso’s car should not have been released from his pit stop with the existing damage, contravening a sporting regulation that states “Competitors must ensure that their cars comply with the conditions of eligibility and safety throughout each practice session, sprint session and the race”.

After hearing the Haas protest, the stewards decided – in conjunction with FIA technical delegate Jo Bauer – that the car was unsafe, and gave Alonso a ten-second stop/go penalty, retrospectively converted into a 30-second time penalty that demotes him to 15th place overall.

Alonso had finished seventh, and his penalty promotes Sebastian Vettel into that position ahead of Kevin Magnussen, Yuki Tsunoda and Esteban Ocon.

Haas had reported the damaged mirror to race control on two occasions and been told it was being looked into, but no action was taken during the race. Significantly, in announcing the decision, the stewards wrote: “The Stewards are deeply concerned that Car 14 was not given the black and orange flag, or at least a radio call to rectify the situation, despite the two calls to Race Control by the Haas Team.

“Notwithstanding the above, Article 3.2 of the Formula 1 Sporting Regulations is clear – a car must be in a safe condition throughout a race, and in this case, Car 14 was not. This is a responsibility of the Alpine Team.” 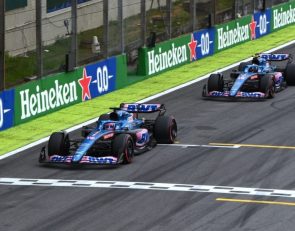