Formula X (FX) opened the second of three Hagerty Race Days at the 59th SCCA National Championship Runoffs taking place Sept. 24-Oct. 2 at Virginia International Raceway. Originally, the FX race was slated to take place late Friday. However, a delay earlier in the day — along with some harsh weather thanks to remnants of Hurricane Ian — required that the event be moved to first on the schedule Saturday morning.

For their trouble, the FX field faced much better conditions Saturday than if they had raced Friday evening. The high winds had passed, standing water not as prevalent, and only a heavy mist hung around the 3.27-mile, 18-turn circuit. However, the track was still very much wet as Tire Rack Pole Award winner Trevor A. Russell led the small field to the green in his No. 31 Red Arrow Racing/Inde Motorsports Van Diemen RF Ford.

From the start, Russell controlled the lead and built a gap back to Austin Hill running second in the No. 8 Elan DP08 Mazda. A couple seconds back in third was the No. 4 Insight Driven/LTD Mtrsprts/Hoosier Mygale FC Ford Zetec Power car of Kevin Fandozzi. Further behind in fourth was Dimitrios Tsesmetzis in the No. 72 Global Racing Team Van Diemen RF Mazda.

By the midpoint of the 15-lap race, Russell had a 24-second lead. Hill and Fandozzi, meanwhile, were sorting out the last two spots on the victory podium. On lap nine, Russell went off into the grass at the first turn. His lead was so great, however, that he was able to get back on track and maintain the front spot with a substantial gap on the rest of the field.

Russell, of Tucson, AZ, was never challenged as he went on to claim a victory of 36 seconds for his first Runoffs win, in addition to the runner-up finish he accomplished Friday in the Formula F National Championship race.

“Besides the ‘off’ in Turn 1, it was a great race, super fun, and I couldn’t ask for more,” said Russell, who does all the work on his car. “Compared to the Formula F race yesterday, some of the corners today had less grip, and some actually had more grip. So, the track just changed overall.”

Hill, of Frankfort, OH, maintained his gap on Fandozzi, securing the runner-up spot for his second Runoffs podium appearance. Plus, having an early look at track conditions could aid him later Saturday afternoon when he’s out on course in the Formula Atlantic race.

“I couldn’t get the rears to stick to the ground, so the car wanted to spin everywhere,” Hill said about his FX car. “For the Formula Atlantic race later today, I learned that it is going to be super slick, and you can’t get the power down until you have the car completely straight.”

The third podium step was claimed by Fandozzi, of St. Joseph, MI, for his sixth Runoffs podium appearance in a dozen starts.

“This has been a blast for me,” Fandozzi said while holding a bottle of Mazza sparkling wine. “Running with these young guys, it’s refreshing. My goal today was to keep them honest. If they made a mistake, I’d be there.”

Tsesmetzis finished fourth a couple laps down after spending some time in pitlane during the race. 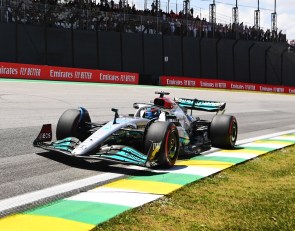