The 2022 edition of the Portland Grand Prix will be remembered for a clean start, a late restart, an all-New Zealand and Australia podium, and a big performance by the main championship contenders.

Polesitter Scott McLaughlin and points leader Will Power spent most of the afternoon running away from the other title hopefuls after starting 1-2 and finishing 1-2 for The Captain while Scott Dixon performed another Portland miracle to complete the podium. Starting P16, Dixon was the only member of the Chip Ganassi Racing team to make serious forward progress by the end of the 110-lap race.

Clearing 13 cars by the checkered flag, Dixon went from being all but eliminated in the championship by mid-race to sitting equal with Newgarden, not far behind Power, entering Monterey.

With the lap 89 restart for Rinus VeeKay nerfing Jimmie Johnson into the Turn 1 wall, McLaughlin continued his mastery, drawing out to a manageable lead over Power. With Dixon on a charge, going from P6 to P3 — where the top three stayed — McLaughlin led his Aussie teammate home by 1.17s and his countryman by 1.6s.

“We did exactly what we needed to do this weekend, which was win and get max points to keep ourselves in the championship fight,” said the three-time race winner, who led 104 laps and sits 41 points behind Power. “Yeah, we’re a long shot. I don’t care because we have a shot so I’m looking forward to it.”

McLaughlin’s composure throughout the event was remarkable as he out-performed his teammates and the rest of the field with relative ease.

“Those are two guys you don’t really [want] breathing down your neck,” he said of Power and Dixon. “I’m really proud of the restart. I’ve worked very hard the last couple of years to learn the tire and get it ready for those restarts. Thankfully we held on. It was pretty dicey behind me. I saw in the mirrors that Will almost got taken out. It was pretty wild but that’s why we love IndyCar racing, right?”

Arrow McLaren SP’s Pato O’Ward held P3 on the restart but was judged by IndyCar to have blocked Dixon and was ordered to surrender the position. He’d finished P4, 13.8s adrift, with Rahal Letterman Lanigan’s Graham Rahal making up six positions to take P5, 14.8s back, and in P6, Colton Herta put in a solid drive for Andretti Autosport.

Penske’s Josef Newgarden was looking like he was on the way to finishing third or fourth, but a strategy call to close the race on the slower Firestone primary tires backfired and he was passed repeatedly over the last 16 laps. Dropping to P8, he and Dixon are now 20 points back from Power.

Other than a harmless spin by Jimmie Johnson (and later crash for the No. 48 driver that triggered the late caution), a long trip across the grass by Romain Grosjean, Christian Lundgaard plowing into an advertising banner in Turn 1 and pitting at the end of the lap to have it removed, and Conor Daly’s day ending after a fire at the rear of his car and a cooked clutch conspired against his mullet-less self, the penultimate race was largely free from drama. The most meaningful outcome was a narrowing of the real title contenders list from seven to three.

It’s Power, Newgarden, and Dixon, and on Friday, the process of crowning a new champion will begin in Monterey. 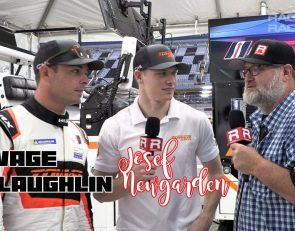