Benjamin Pedersen continued his march toward his first career victory in Indy Lights Presented by Cooper Tires by winning the pole Saturday for the Indy Lights Grand Prix of Portland.

Pedersen turned a lap of 1m3.6698s in the No. 24 Global Racing Group with HMD entry for his first pole in the series. He also had the quickest laps in both practice sessions this weekend on the 12-turn, 1.964-mile permanent road course.

Danish driver Pedersen, who grew up in Seattle, will start Sunday’s 35-lap race (1:05 p.m. ET, Peacock Premium and the INDYCAR Radio Network) alongside teammate Danial Frost, who ran 1m03.783s in the No. 68 HMD Motorsports with Dale Coyne Racing car.

“I’m so happy to get this first pole at what feels like home,” Pedersen said. “I grew up in Seattle, so I really appreciate all of the support.

“I’ve been working so hard for this for a long time, so [we have] a lot of momentum right now. Now the next focus is to win the race.”

Pedersen has finished second in three races this season.

“[I want] a good start,” he said of his plan to begin this race. “I don’t want to think quite yet how [the treacherous Turn 1] is going to map out, but I’ll just try to check out and try to do my own race. Yeah, I’m excited.”

The fastest four drivers qualified within 0.2s of one another. Twelve drivers will take the green flag.

Frost will try to score his second series victory. His first came in May on the Indianapolis Motor Speedway road course.

Andretti Autosport’s Christian Rasmussen qualified third in the No. 28 Road to Indy/Stellrecht entry at 1m03.8546s.

Series leader Linus Lundqvist (No. 26 HMD Motorsports with Dale Coyne Racing) will try to clinch the season championship in Sunday’s race by starting from the fourth position. His qualifying lap was 1m03.8606s.

Lundqvist, a winner of five races this season, will have the title secured heading to next week’s season-ending doubleheader at WeatherTech Raceway Laguna Seca if he leaves Portland with at least a 109-point lead. He enters Sunday’s race ahead of Matthew Brabham by 108 points.

Brabham qualified sixth in the No. 83 Andretti Autosport entry at 1m04.261s. He will start alongside teammate Sting Ray Robb in the third row. Robb qualified the No. 2 Sekady car at 1m03.939s on his 21st birthday.

Hunter McElrea and Brabham each have two race wins this season, Frost and Rasmussen have one each.

Flinn Lazier, the son of 2000 IndyCar champion Buddy Lazier, will make his series debut in the No. 15 Abel Motorsports entry from the 12th position. 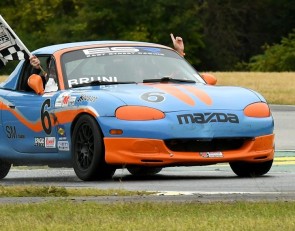