The rain decided to give the TC America powered by Skip Barber drivers a break for their last race at America’s National Park of Speed.

It was a weekend sweep for championship leader Jacob Ruud, who claimed the win in the second race of the weekend with his friends and family cheering him on trackside. With Road America being his home track, the driver of the No. 1 Fast Track Racing BMW M2 CS had no issue quickly lapping around the 4.048-mile layout.

“Just driving this car is a privilege,” Jacob Ruud stated after the race. “You have to keep up your pace because the guys behind me were not going away… I had to manage the tires throughout the whole race. It was hairy out there, but the guys put together a great car for me. I was comfortable the whole way through and we got it done. I’ve got 30 people here today to celebrate with. Thank you to everybody that was watching, and thank you to everybody that came out this weekend.”

Though Ruud was able to pull a 2.827s gap on the No. 26 Rigid Speed BMW M2 CS at the end of the race, it wasn’t an easy win as Lucas Catania in the No. 26 Rigid Speed BMW M2 CS was right on his bumper for a significant portion of the race, but ultimately had to settle for second place. Catania has been on all but two podiums this season. The No. 44 Rooster Hall Racing BMW M2 CS of Colin Garrett was also in the mix, looking to score a fourth win. He is currently sitting second in the championship standings, and his third place will give him valuable points coming into Sebring in a few weeks.

Saturday’s race-winner Clay Williams was plagued with electrical issues in his No. 60 MINI JCW Team machine, making him lose ground at the beginning of the race. His team elected to keep him on the track, walking him through a full power cycle during the race. It clearly worked as he was able to gain power back, and quickly move back up the grid, much to the dismay of class leader Jeff Ricca in the No. 78 Genracer/Ricca Autosport Hyundai Veloster N, who was well underway to claim his first win of the season.

Class points leader Kevin Boehm in the No. 9 CrowdStrike Racing by Skip Barber Racing Honda Civic Type-R added spice into the mix as he was lurking behind Williams during an intense battle that lasted several laps. Boehm, who was overtaken by Ricca at the start of the race, was able to move past him up into second place towards the end of the race. However, he was unable to catch race-winner Williams.

“As soon as we went green, I knew we had an issue,” explained Williams. “I had to cycle the car as fast as I could and I knew I was going to lose many spots, but as soon as we got the car back on again, I just put my head down, and I pushed the car to the limit. I was able to get by [Boehm] and [Ricca]. I couldn’t have done it without everyone at LAP, Patrick MINI and Donate Life. I’m thankful for my whole family, it was a great weekend for everyone.”

Once again the TCA class put on quite a show, especially thanks to MINI JCW Team teammates Cristian Perocarpi and PJ Groenke. MINI got a 1-2 finish thanks to these two drivers, but it wasn’t an easy win for Perocarpi, who almost lost the lead with a few minutes remaining in the race. Lucas Catania was almost the decider of the duel as he passed Perocarpi and Groenke into the Canada corner, opening the door for Groenke to make an unsuccessful pass attempt for the lead.

Points leader Carter Fartuch was a spectator to the intense battle out front. The No. 16 Skip Barber Racing School Honda Civic Si rounded off the class podium. Fartuch maintained his points lead with four races left in the season.

“It’s awesome. We worked really hard, both in TC and TCA to be able to come here and do that. It’s really unbelievable,” said Perocarpi on MINI’s sweep. “We had a great start to the race, which was surprising because we don’t usually have very good starts here, but I was able to take the lead and I never looked back. It’s been an amazing weekend. I would like to thank MINI USA — the only reason I’m here is because of them. I was just some kid on a computer racing on iRacing last year — I had never driven a race car — and now I’m here winning in the MINI machine. Everybody at the shop has been working so hard to come here and do this. It was amazing.”

Gresham Wagner (No. 21 TechSport Racing Subaru BRZ) had a less than ideal birthday. Gresham, second to Fartuch in the points standings, had car issues early on, losing ground to the leaders. The team went into salvation mode as the goal was only to score points in race two. It was a tough day for his TechSport Racing teammate, as Devin Anderson had to retire his Subaru BRZ with seven minutes remaining.

The next rounds for the TC America racers will be at Sebring International Raceway on September 23-25. The SRO Motorsports America season will conclude at the Indianapolis Motor Speedway on October 7-9. 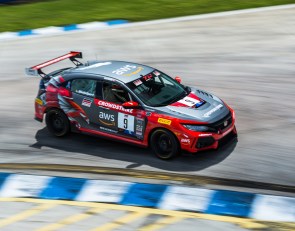