A bit of rain, but not nearly as much as expected, shook up strategies, and gave various teams advantages at different points in the IMSA WeatherTech SportsCar Championship race at Road America. In the end, pole sitter Filipe Albuquerque was in front at the checker for the team’s first victory at at the 4.048-mile, 14-turn Wisconsin circuit, and Wayne Taylor Racing took the championship lead from Meyer Shank Racing with Curb Agajanian. The No. 10 WTR Acura with Ricky Taylor and Albuquerque head into Petit Le Mans in a virtual tie with the No. 60 MSR team of Oliver Jarvis and Tom Blomqvist, leading by only 19 points.

Jarvis was looking likely for a second-place finish to still maintain the championship lead by the slimmest of margins until about eight minutes left in the 2h40m IMSA Fastlane.com SportsCar Weekend. However, as the leaders – Albuquerque, Jarvis and Earl Bamber in the No. 02 Chip Ganassi Racing Cadillac – approached a big clump of GT cars in the Carousel, Albuquerque got through, while Jarvis got held up and Bamber bumped him from behind.

Jarvis made his move around the GT car exiting the Carousel, but couldn’t make the apex at The Kink, went off track and brushed the wall on drivers’ left before the Acura turned and headed across track hard into the wall on drivers’ right. Miraculously, while the impact did a lot of damage to the bodywork, it didn’t seem to damage the suspension and even bounced the car in the right direction and Jarvis continued, though losing spots to Bamber and Renger van der Zande in the No. 01 CGR Cadillac.

The Kink was littered with carbon fiber debris and the race ended under full-course caution, Albuquerque/Taylor, Bamber/Alex Lynn and van der Zande/Sebastien Bourdais making up the podium. Jarvis and Blomqvist ended up fourth, just ahead of the No. 5 JDC-Miller Motorsports Cadillac of Tristan Vautier and Richard Westbrook.

“He nearly passed me because we were going through the Carousel on the outside,” said Albuquerque. “And I passed the [No. 51 GTD Rick Ware Racing Acura NSX] and I managed to go in and it was, for me, super important to pass the LMP3 before The Kink. I looked back and Jarvis got held there and I looked back again to see the gap. I could see him going on the grass. ‘Oh, this is not good.’ Then I could see the car completely 90 degrees to my mirror and going to the wall. It’s like, ‘That’s it for sure; it’s [going to be] be yellow.’ I asked if he was OK, because it was brutal and I could see a lot of things going around and then I saw the replay on the TV there, but then they said it’s still driving, he’s still P4 actually.”

At one point, Westbrook looked to be in control of the race as he gambled on wet tires in intermediate conditions early. The race began under a light drizzle, the track not wet enough for rain tires. Albuquerque made a fantastic start to put a gap on everyone else, while Blomqvist slid backwards from second to the tail of the DPi field. Bourdais, who started last due to a crash in qualifying, made his way to second. The rain was getting heavier, then lighter, then heavier again. When the first full-course caution came 27 minutes in for Steven Thomas sticking the No. 11 PR1 Mathiasen Motorsports ORECA LMP2 car in the gravel at Turn 8, JDC-Miller made a big gamble, putting wet tires on the No. 5. Meanwhile, MSR was using the caution to put Jarvis in the car and make some suspension and aero adjustments, having gone with a more wet setup in anticipation of different conditions. It was only JDC-Miller, though, that went for wets, all other teams opting for scrubbed slicks.

As the rain got heavier heading toward the restart, the gamble paid off. Westbrook charged into the lead and sailed off into the distance, as LMP2 cars on wet tires took positions from the DPi cars, with the top three LMP2s running second through fourth. Jarvis was the first to opt for slicks, while the others stuck it out until an hour in, the point at which they could confidently make the end of the race with two more stops.

The rain eased and the track dried, and when the second caution came out — ironically for debris from the No. 90 JDC-Miller Motorsports No. 90 Ligier LMP3 — Westbrook’s lead was erased and all teams opted for slicks. Westbrook handed the car over to Tristan Vautier and Albuquerque got back into the No. 10, Taylor having handled the stint on wets.

Making changes and going to wets earlier paid off for MSR, and they were now in third with a car performing much more to their liking. On the next round of pit stops, under the third full-course caution of the race, the MSR crew got the No. 60 out first, with Albuquerque right behind Jarvis. The two Acuras pulled away from the pursuing Cadillacs, Jarvis building a nice lead over Albuquerque, but the gap closed as they approached GT traffic. Jarvis got held up before darting right. The gap he had actually served Albuquerque, as the No. 10 had more time to make a choice and went left, putting two wheels in the grass while taking the lead, setting up the drama in the final minutes as Bamber closed on the leading Acuras to make it a three-way fight.

“When the traffic came I was just ready for it,” explained Albuquerque. “So when it came, I saw he was getting traffic in [Turn] 7 and…I knew that was my momentum going. I timed it perfectly and I took a lot of risks on going on the left, half a car on the grass, and then beat him on the braking…”

With WTR taking victory and MSR finishing fourth, Albuquerque and Taylor have a 19-point lead over Blomqvist and Jarvis in the championship. Depending on qualifying, the championship could come down to simply which team finishes ahead of the other at the 10-hour Petit Le Mans on Oct. 1.

“This was all about belief and the guys. I just drove for the wet part of the race,” said Taylor. “Filipe’s been so strong all weekend. Just give him the car and he knows what to do and he did an amazing job. I feel bad for Jarvis; it looked like he just got pickup on the tires or something. A great day for Acura, a great day for Konica Minolta and we’re going to really enjoy this for the next month-and-a-half off. It’s going to be nice.”

Era Motorsport took its second consecutive LMP2 win at Road America with Ryan Dalziel and Dwight Merriman at the wheel of the No. 18 ORECA. Dalziel had been locked into a late-race battle with Louis Deletraz in the No. 8 Tower Motorsports ORECA before he was able to get by going into Canada Corner with 11 minutes left, just three minutes before the final caution came out.

“We were trying to save fuel,” said Dalziel. “And it seemed like we were able to save a little easier than he was. He and I were just talking about that. It seems like they were having to hit a more aggressive number than we were. The team were telling me to hang tight, but I just saw an opportunity and it happened. There was a couple of times where I could have probably stuck in there, but I backed out. Then that point, it was time to go.”

Delatraz and championship leader John Farano were second, with Fabio Scherer and Dennis Andersen third in the No. 20 High Class Racing ORECA.

Gar Robinson and Felipe Fraga won LMP3 in the No. 74 Riley Motorsports Ligier. Matthew Bell and Orey Fidani were second in the No. 13 AWA Duqueine, while championship leaders John Bennett and Colin Braun were third in the No. 54 CORA Autosport Ligier. Although Robinson closed the gap to Braun and Bennett, the gap is nearly insurmountable with one race left to go. 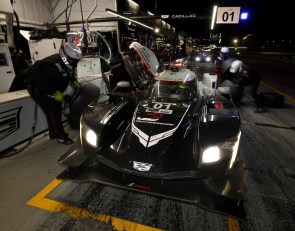 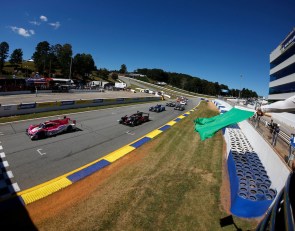