Race 2 of TC America powered by Skip Barber Racing School at Virginia International Raceway was a fast-paced affair packed full of thrilling battles across every class. Being it was Father’s Day, Fanatec GT World Challenge America competitor David Askew had the opportunity to watch his daughter Olivia Askew (No. 29 Fast Track Racing BMW M2 CS Cup) from the pit lane, as did many families who came out to watch their sons and daughters take to the fast and tricky tarmac of VIR.

TCX
Starting from pole, Jacob Ruud (No. 1 Fast Track Racing BMW M2 CS Cup) led flag-to-flag to score his fourth win of the season and extend his championship points lead. While Ruud was never passed, positions two through five definitely kept him honest as he wasn’t able to gain a comfortable amount of real estate until later in the race. A yellow, followed by a red flag, brought that to an end around the 20-minute mark due to an incident in the TCA class. While battling up close at the front, contact was made between Colin Garrett (No. 44 Rooster Hall Racing BMW M2 CS Cup) and Lucas Catania while battling for P2 in Turn 4, but officials deemed it a racing incident.

Jessica Tracy (No. 97 Random Vandals BMW M2 CS Cup) made her TCX debut this weekend, and after experiencing mechanical issues during Race 1 yesterday, stayed in the fight and had an awesome drive all-race-long.

Ruud never gave up position and drove home to first place. “I think it’s important after a day like yesterday that you just look ahead to tomorrow,” Ruud said. “Whatever happened, happened, we made some mistakes and ended up where we ended up. It’s important to refocus and run the race that we have in front of us.”

TC
During the race’s early laps, TC saw some thrilling passes at the front among Kevin Boehm (No. 9 Skip Barber Racing Honda Civic Type R), Jeff Ricca (No. 78 Genracer / Ricca Autosport Hyundai Veloster N DCT TC), and Clay Williams (No. 60 MINI John Cooper Works Team JCW Pro). Around the 18-minute mark, Williams out-braked Boehm into Turn 1, was able to barely hold onto the rear-end through the turn, and ended up accomplishing a solid jump ahead. Jeff Ricca wasn’t far behind, and along with teammate Nicholas Barbato (No. 88 Genracer / Ricca Autosport Hyundai Veloster N TC) stayed in solid contention throughout the remainder of the race.

“Whatever it takes,” Boehm said in response to what his strategy for keeping the car in top shape was. “I’m looking at all the numbers on the dash, and I’ve programmed it to give me the information I need to know what to do. Whether it’s looking at the temperatures, or just feeling the car, all of those things add up. In a race like today where it’s really complicated with the restarts, it’s really tough. But you just gotta go with the flow, and that’s what it took today.”

Jeff Ricca was close behind by just over two seconds in second, followed by teammate Nicholas Barbato in third.

TCA
TCA remains a fierce battleground between Honda, MINI, Subaru, and Hyundai racers. Shortly after seeing a waving green flag, Carter Fartuch out-braked and skillfully took the lead from row 2 in Turn 1, which then turned into a solid lead as he drove away from the pack. Gresham Wagner gave chase however, and the both were able to pull away from the pack to battle on their own.

Saturday race winner Gresham Wagner (No. 21 TechSport Racing Subaru BRZ) had a tough turn of fortune around the 20-minute mark when he exited the track and impacted the tire wall at a high rate of speed. This brought about a full-course yellow, followed shortly by the red flag for barrier repair. When the race restarted, Wagner’s teammate Devin Anderson was able to safely pass Fartuch through one of the track’s more technical sections. With both teams based at VIR, this weekend’s races have definitely flipped the term “home field advantage” on its head. However, Fartuch snatched the lead back during the final lap and crossed the finish line by a whisker in front of Anderson.

“TCA puts on the best show possible, and has some of the best drivers as well,” Fartuch said. “Devin has done an excellent job with as little experience as he has, and I really want to say that I hope Gresham is ok. You never want to see your competitors hit a wall that hard. Devin made a little slip out of Oak Tree and I just capitalized on it as I knew we were strong down the straight aways. They had us big time in the braking zones and the corners, but I did what I had to do through Rollercoaster.”

Devin Anderson finished second not far behind, followed by Christian Perocarpi (No. 61 MINI John Cooper Works Team JCW) in third, who was also the birthday boy in the paddock today.

Follow the action via live stream, or catch it as a recap, on the GT World YouTube channel. Live timing and scoring and session reports are available at tcamerica.us. 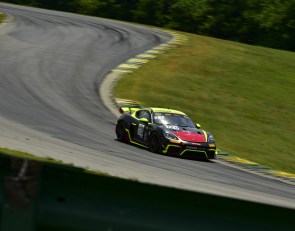