Unlike in the modern era of F1, we never had any way of keeping flow through the exhaust when the driver lifted off for consistency but, we never knew how much that would hurt us on ovals. On road courses it was livable; on street courses it was a huge advantage with the stop/start nature of the tracks. The center of pressure shift to the front helped under heavy braking for all the slow corners, and the rearward shift helped out with traction. On ovals, a slight breathe of the throttle upset the “steady state” balance considerably.

Mertens’ use of twin exhausts in place of the traditional single-outlet exhaust allowed the first known use of a blown IndyCar diffuser. Dan R. Boyd photo

Aerodynamically, we knew we were in trouble at the first Indy test early in the year. Al Jr.’s helmet was being sucked upwards to the extent it caused so much neck pain he couldn’t do long runs. We had decided to have no windshield like the F1 cars, but the high Indy speeds were playing havoc with him so we had to introduce a little flip-up just before the leading edge of the cockpit. Also, he was struggling with the lateral loads on his neck so we had to design and introduce a pad to support the right side of his helmet. And worst of all, we had too much drag.

We had plenty of downforce, which was ultimately a benefit on low-grip days, but the drag was way too high. We half seriously talked about taking the wings off, but their drag contribution was negligible and we still needed a trim device.

Around that time our aero guy left. I’m not saying there was any creativity in his aero numbers from the wind tunnel, but he knew we were in a “no way to fix it” problem and took off. Enter Andy Brown.

Despite its sleek shape, the G92 carried an invisible aerodynamic parachute behind it at the Speedway. Dan R. Boyd photo

Andy had just finished a stint at the Leyton House F1 team learning the tricks of the trade from Adrian Newey, although Andy was a very clever guy in his own right. Andy was a breath of fresh air, knew his aero stuff and made gains with the G92’s road and street course package with improving the external devices, but could do nothing with the base package for the Speedway car.

At a rainy Portland test early in the year, I remarked to Andy how high the rooster tails were going up in the air relative to the car. We discussed this in relation to the 1/4th model wind tunnel tests we were doing at MIRA, and we decided we should make and move to a bigger 1/3rd model at Brackley, the old March wind tunnel.

The results with the 1/3rd model were shocking. We still had the same downforce but the drag went up a lot. The relative size of the quarter-scale model meant the flow around the car was being choked. In the third-scale tunnel, the relative difference was such that the flow was clean around the model and gave us more realistic results. But it was something we didn’t want to see with the added drag now revealed and confirmed. Now we could understand why the car was performing like it was on the track.

The Galmer was a beast on road and street courses. Dan R. Boyd photo

When we got to Indy, we qualified both cars and were relieved to be solidly in the show. On Carb Day, Al couldn’t get the car to his liking, and was pretty bummed out, but we had no idea what we would face on race day.

There’s no question that Michael Andretti was dominating the race with the small Ford/Cosworth XB-engined Lola. We were offered this by Cosworth early on and made a wind tunnel model to suit. The G92 chassis was very narrow — the engine across the heads being typically the widest part — and the results were good. But, Rick Galles was a Chevy dealer so that was never going to happen.

Ironically, the XB engine’s failure in Michael’s car is what essentially handed us the race. At the end we seemed to have the legs on Scott Goodyear everywhere but coming out of Turn 4, where Al said the car was starting to go loose. This was strange as usually Turn 4 was one of the easier corners but Al’s precautionary lift on the last lap nearly gave it all away. However, it did provide, as they say, the closest finish in the history of the Indy 500.

I wasn’t watching as I had my head in my hands. I was convinced it was all going to end like ’89 when Al got together with Emerson Fittipaldi. I didn’t realize the race went in our favor until crew chief Owen Snyder jumped on me. Danny finished fifth, but then was controversially relegated to seventh for allegedly passing under a yellow. We should have protested but we were so wrapped up in the win. What a day.

Also, what we didn’t know, and weren’t told until the end of the season, was that Rick was going to cancel the Galmer program. This was a great pity as we had learned a lot from the first car. Andy said he had achieved downforce and lift/drag figures not to be seen anywhere else until wind tunnel testing a Reynard chassis in ’96.

After Indy, the G92 was leading the championship until the penultimate race at Nazareth and did generate about $3.5 million. After Rick chose to stop, I sold the G93 design, but not Andy’s aero stuff, to Reynard so we could survive without the Galles involvement. Then Bruce McCaw started the PacWest team and jumped in to replace Rick. After running Dominic Dobson at Indy in ’93 with the old G92 chassis, that was the end of the car’s racing story. 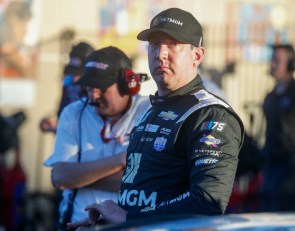