It’s time for the GMR Grand Prix of Indy — 85 laps of Indianapolis Motor Speedway’s 2.439-mile, 14-turn road course. Get set for all the action with this look at five things to watch for:

• Michael Shank’s smile was seen for hours after he, his wife Mary Beth, and Meyer Shank Racing co-owner Jim Meyer earned their first NTT IndyCar Series podium in 2019 at the GMR Grand Prix. Former MSR driver Jack Harvey put in a heck of a performance to bring the No. 60 Honda home in third place, and after spraying champagne on the podium and hoisting the trophy aloft in celebration, it changed hands as Shank clamped onto the cup and didn’t let go until long after the final interviews were completed.

• That first podium came at MSR’s 12th IndyCar race; 25 races later, its next podium would be produced — also at Indianapolis — as Helio Castroneves won last year’s Indy 500. Since their greatest day in the sport, 14 more races have passed without a podium, which makes MSR’s Indy-friendly track record something to consider as its full-time line-up of Castroneves and Simon Pagenaud look to deliver on the immense promise contained within the team. History says the Indy road course and oval have been overly generous to both drivers and their Ohio-based team; don’t be surprised if the MSR drivers present another trophy for Shank to tote around the Speedway on Saturday.

• The comparatively tiny Juncos Hollinger Racing team put on a show at the most recent IndyCar race where the series paid its first visit to a natural terrain road course. Rookie ace Callum Ilott made his first appearance inside the Firestone Fast 12 in qualifying and ran inside the top 10 during the Acura Grand Prix of Alabama before overambition blighted his charge forward with the No. 77 Chevy. If JHR and Ilott can carry some of their natural-terrain pace over to the GMR Grand Prix, we could be in store for another breakout performance by the only one-car team in the field.

• Rahal Letterman Lanigan’s expansion to three full-time entries has offered glimpses of promise for its two newcomers in Jack Harvey and Christian Lundgaard. RLL veteran Graham Rahal continues to lead the trio with three top 10 results this season, and it’s here at Indy where Lundgaard and Harvey find themselves in need of quality finishes to springboard into the Indy 500. For Lundgaard, who shocked the series during a one-off Indy road course appearance last year where he qualified inside the Fast Six, the flat and fast circuit is the perfect place for him to rediscover the form that led RLL to get his signature on a contract. Harvey, whose podium brought so much joy to MSR, is also in need of stopping a season-long slide. Together, these two have a prime chance to change the trajectories of their year before the field grows and the odds grow longer for a turnaround at the Indy 500.

• The swashbuckling Juan Pablo Montoya is back for another month of May warmup at the GMR Grand Prix, where he’ll use the race to get back in the groove with the AMSP team and roll into Indy 500 practice with the No. 6 Chevy effort warmed and ready to perform from the moment the green flag waves. The GP wasn’t overly kind to JPM last year as he finished a trouble-filled 21st, but the two-time Indy 500 winner’s fortunes improved for the big race as he produced a solid tun to ninth. With teammate Pato O’Ward’s win earlier this month at Barber Motorsports Park, we just might see the 1999 CART IndyCar Series champion turn back the clock and remind the younger generation that few are faster, braver, or more committed on a high-speed road course. 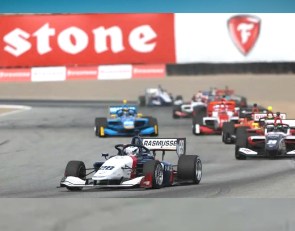