Lime Rock Park hosted Trans Am racing for three consecutive years on May 30, when the traditional Memorial Day holiday fell during the week. The midweek dates brought large crowds to the Connecticut circuit, but also provided schedule conflicts with several of the Trans Am regulars who also competed in the Indianapolis 500.

On Tuesday, May 30, 1967, Trans Am paid its first visit to the Berkshire Hills in the fourth race of its second season of competition. Peter Revson made a winning debut in a Mercury Cougar fielded by Bud Moore. Revson was filling in for Parnelli Jones, who came four laps shy of winning the Indy 500 in a turbine-powered race car.

The following year, Memorial Day fell on a Thursday. Donohue captured the pole and then led all 171 laps of the three-hour race, averaging 87.21 mph.

Jerry Titus took second in a Mustang, two laps back, followed by Revson in an AMC Javelin (pictured above). Reigning NASCAR Grand National champion David Pearson filled in for Parnelli Jones in a Ford Mustang, but lost oil pressure 22 laps into the contest and placed 20th — and last. Tony Adamowicz took fourth overall, winning the Under Two-Liter class.

Friday, May 30, 1969, again had several of the Trans Am stars missing Lime Rock to compete at Indianapolis. Carroll Shelby called on a local driver — Sam Posey — to fill in for Revson in his Mustang, and the resident of nearby Sharon, Conn., went on to win (pictured, top).

Swede Savage — subbing for Parnelli Jones in Bud Moore’s Mustang — took second in the two-hour, 30-minute race, 51.1s back. Third went to another fill-in, with Bob Johnson at the wheel of the Sunoco Camaro normally piloted by Mark Donohue. Under-2 honors again went to “A-to-Z” Adamowicz, driving a Porsche.

For 1970, Lime Rock avoided the Indianapolis 500 conflict by racing on May 9, and the race was won by Parnelli Jones. Briar Motorsports Park in Loudon, N.H. held the 1970 Memorial Day weekend race, won on a Sunday by Donohue — who had finished second at Indy the previous day.

The following year, the Memorial Day holiday moved to the final Monday of May, paving the way for new holiday traditions.

The Trans Am tradition continues at Lime Rock Park this Memorial Day weekend (May 27-30) with the Trans Am Series presented by Pirelli. For tickets click here. 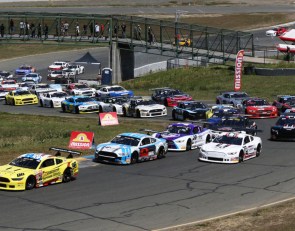