Q: What’s the small hockey puck-like object F1 drivers remove before getting out of the car out on the track? I saw it in Bottas’s crash at Miami in FP1. After a driver stops, he has a small puck-like device in his left hand (usually) and sets it under the Halo on the cowling, then takes off the wheel and gets out. I saw Bottas throw the “puck” into the seat before he walked away. Does it disarm the electronics or high voltage?

CHRIS MEDLAND: Sadly, it’s nothing quite as cool or clever as something disarming the car. It’s the central locking point that the driver’s harness clips into. Multiple points all clip into it, and they release their belt buckles from that device and then are able to climb out of the car quickly. Sometimes you don’t see it because drivers might just drop it straight onto the seat rather than place it on the cockpit.

Q: At what point does Michael Andretti take the hint and move on from his attempt to enter Formula 1? The current teams are sending the not-so-subtle message that his entry would cost them money and that they’re having none of it.

CM: At the end of the day, it’s not just up to the teams. They have too much say in the rules sometimes (in my view) and if Formula 1 and the FIA — the ones that would grant the entry license — wanted to accept his team then it would be in. So in many senses he could ignore what the teams are saying, but I think he’s doing the right thing in continuing to lobby them and push ahead with his plans, because new teams have always been a concept within F1, with only competitive enough ones able to take a slice of the revenues away from the others. The competition is healthy if you ask me, and it shouldn’t be up to the teams to decide because of course they have vested interests. Andretti needs to keep pushing until there are no avenues left and F1 and the FIA has come out and said they won’t allow a new team to enter even if it meets the criteria they’ve set out in the Concorde Agreement, at the very least to highlight that F1 has become a closed shop.

Q: Marshall Pruett did the Hamburger and French Fry show with Bourdais, and recently did it with Pato O’Ward using the Taco name. Going to put you on the spot, Kelly Crandall. If you had to do a NASCAR version of what Marshall does, which drivers would you pick and what would your show be titled?

KELLY CRANDALL: This is a fun question and something that I’ve never thought about, so let’s break it down. It would have to be a driver who wouldn’t mind doing more media and enjoys being in front of the camera. And a driver who is engaging, and with whom I have a good rapport. At least that’s how I look at it. With that said, I think about a Tyler Reddick, whom I’ve covered from Trucks up to Cup and who has a great personality that maybe people don’t see much of unless they follow closely on social media. Austin Cindric is the same. Another one would be Brad Keselowski for a veteran voice and insight; someone who is always a good interview and can dig into a topic. The same could be said for Joey Logano. There are definitely a few that would be at the top of the list whom I think would be a good fit for something like that if they were willing to do it.

Q: Sometime this month, you’re walking through Gasoline Alley. You find an empty Clabber Girl can. You pick it up to shine it, and the ghost of Tony Hulman emerges. He grants you three wishes for the 100th running of the Indy 500, and they’re guaranteed to come true. What are they?

ROBIN MILLER: Josef Newgarden, Graham Rahal and Marco Andretti finish in a dead heat and it takes 30 minutes to determine the winner, so IndyCar is on “SportsCenter” the whole time while the three of them are interviewed. Roger Penske buys IMS and gives it to me. I rewrite the rules, double the purse and ban all music from the track except “Back Home Again In Indiana” and the ballad of Jimmy Bryan. Have A.J., Parnelli, Dan Gurney, Gordy, J.R., Mario and the Unsers as grand marshals for the 110th Indy 500. 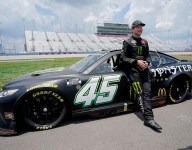