Myles Rowe bolstered his 2022 championship aspirations at Barber Motorsports Park this afternoon en route to his second consecutive victory in the first three rounds of the Cooper Tires USF2000 Championship. The 21-year-old Pabst Racing driver claimed his first Cooper Tires Pole Award yesterday and has now moved into the championship lead, albeit equal in points with teammate Jace Denmark.

New Zealander Billy Frazer continued his fine form from the opening rounds to finish second for Exclusive Autosport with Michael d’Orlando – who was second in the championship last year – claiming his first podium of the season following a pair of fourth-place finishes in St. Petersburg.

Rowe held his own in a chaotic opening lap that saw front-row qualifier Bijoy Garg of DEForce Racing fall to fifth and third-place starter Jagger Jones of Cape Motorsports relegated to 10th. When the field began their second lap, it was Simon Sikes of Legacy Autosport settling into second with Frazer third and d’Orlando fourth.

Leaders remained unchanged for the first 15 laps until Frazer began his hunt for Sikes. The pair were side-by-side on Lap 16 in the Turn 7/8 combo with Frazer pulling an over/under to nab second and Sikes going off-track. Sikes resumed in fifth with a thank you from both d’Orlando – who posted the fastest lap of the race – and Garg who gained a position.

Rowe toured the final lap of the 2.3-mile circuit with a comfortable 1.7s advantage at the checkers earning the second PFC Award for team owner Augie Pabst.

In Saturday morning’s qualifying for Round 2 of the Cooper Tires Grand Prix of Alabama, Weir claimed his first career Cooper Tires Pole Award and will lead the field to the green at 9:00 am CDT Sunday. 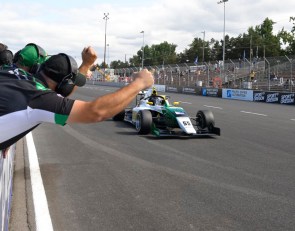 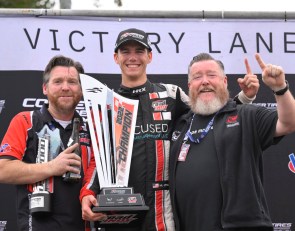 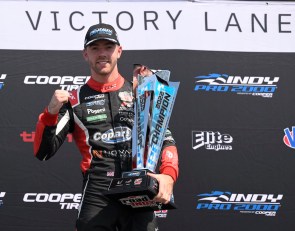