Jordan Pepper and Andrea Caldarelli claimed the Crowdstrike Fastest Lap in Pro with a 1m37.310s, while George Kurtz and Colin Braun laid down the quickest in Pro/Am with a 1m37.708s, and Jean-Claude Saada and Conrad Grunewald claimed the fastest in Am with a 1m38.657s.

“Coming into our second year together, we know exactly what we do, and the processes are the same,” Pepper said of his teamwork with Caldarelli. “We just start off a lot better than the others, but I’m sure (our competitors) will get a lot better as the season progresses.”

“We always want to improve,” Caldarelli spoke of the team getting the car’s setup right. “We tried a couple of things with the setup and they worked quite well to be honest.”

In Pro, Jordan Pepper (No. 1 Lamborghini) held a comfortable lead for the entire duration of his stint which turned into a comfortable stint for teammate Caldarelli, at one point as high as 43.90s away from P2. Caldarelli then drove their No. 4 Lamborghini to an overall victory. Phillip Ellis (No. 33 Mercedes-AMG) crossed the finish line next, followed by Loris Spinelli (No. 6 Mercedes-AMG).

In Pro-Am, the father-son-in-law duo of Charlie Luck (No. 45 Porsche) and Jan Heylen secured the top spot on the podium, followed by George Kurtz and Colin Braun (No. 04 Mercedes) second, and Chandler Hull and Bill Auberlen (No. 94 BMW) in third.

“I don’t know of any father and son-in-law combination that’s ever won,” Luck spoke of his win with Jan Heylen. “Jan’s proven himself; he’s been a winner for years and years. It’s incredible.”

“This driver pairing is pretty special,” Heylen stated about being teamed up with Luck. “We had a tough time leading up to the race, as we didn’t feel the speed in the car so much during practice. So great driving by Charlie. He was a bigger factor today in giving us a win.”

The No. 93 Acura NSX driven by Ashton Harrison and Mario Farnbacher was given a drive-through penalty due to the team putting tires on too late before the out lap which led to Harrison being a lap down before handing the car over to Farnbacher.

In Am, after a spirited battle with Charlie Scardina and Onforio Triarsi (No. 23 Ferrari), Conrad Grunewald (No. 61 Ferrari) drove to the win for AF Corse alongside Jean-Claude Saada. 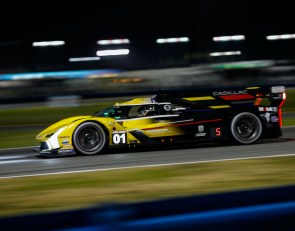