It was a battle of two- and three-stop race strategies to open the NTT IndyCar Series at the Firestone Grand Prix of St. Petersburg, and after 100 torrid laps of action under blue Floridian skies, polesitter Scott McLaughlin captured his first victory for Team Penske after fighting to the checkered flag with Alex Palou in hot pursuit.

“Oh my God!” McLaughlin exclaimed after crossing the finish line with just 0.5095s over the defending series champion. The New Zealander’s No. 3 Chevy was the class of the field, making the two-stop plan work to perfection as he led home Chip Ganassi Racing’s Palou in the No. 10 Honda and teammate Will Power in the No. 12 Chevy (+2.4671s) to earn a podium 1-3 for the Bowtie.

“Thank you to Roger Penske,” the New Zealander added. “What a day. I’m out of breath. We did it. Can’t believe it.”

“He did an amazing job,” Palou said of McLaughlin. “I’m super happy he got his first win. If we look at the result we got today and how we started the weekend, I’m really happy. I don’t think we had the pace Scott had, so if this is one of our worst races, I’ll be really pleased.”

Those on the three-stop strategy suffered as the top performer was CGR’s Scott Dixon in P8, and from there, Pato O’Ward in P12 for Arrow McLaren SP and Josef Newgarden in P16 for Penske were among those who were disappointed in their outcomes. The only outlier on the day was Andretti’s Alexander Rossi who was left out during a caution and later pitted; on a two-stop strategy, but out of sequence with the others, he finished P20.

St. Petersburg is known for being a magnet for crashes and cautions, but thankfully the adversity was kept to a minimum this time as Dale Coyne Racing with HMD Motorsports rookie David Malukas crashed on his own to bring out the only yellow of the day on lap 25. A.J. Foyt Racing’s Dalton Kellett, who had his best day in the series on Saturday with his 14th-place qualifying, was hit with an engine issue that left him parked on pit lane for more than 10 laps as a fix was eventually found.

McLaughlin owned the weekend — fastest in practice and qualifying on Saturday, led from the start, kept a charging Herta and Palou behind him with relative ease, and shattered pre-season predictions for who would be in play for the title at the end of the 17-race championship. The Kiwi is here, and as his race engineer Ben Bretzman likes to say, McLaughlin’s “The real deal.”

Scott McLaughlin led from his first pole position and left Will Power behind as Colton Herta charged into second. Rinus VeeKay moved to third as Power fell to fourth. Pato O’Ward leapt from P16 to P9! Romain Grosjean, P5, complained about Power making contact and mentioned he was hit on the front wing as Power closed the door into Turn 1.

Five laps in, McLaughlin was 1.4s out on Herta and VeeKay was 2.5s back. All three are on Firestone alternate tires. Power in P4 is the only drive in the top 10 to start on primaries. Marcus Ericsson took P5 off of Grosjean, up from a P8 start. Palou is P8 after starting P10. Simon Pagenaud, who started P6, is back to P10.

Jack Harvey the first to pit on lap 8. Felix Rosenqvist and Helio Castroneves follow on lap 9 as the alternate strategies begin for those with poor starting spots. Josef Newgarden was next to pit on lap 10, trading alternates for primaries.

By lap 11, McLaughlin was 1.8s clear on Herta and 4.0s on VeeKay. Power, on the slower primaries, is impressive in P4 just 4.4s back from the leader. Scott Dixon joined in on the three-stop pit strategy on lap 12. O’Ward pitted on lap 13. Maybe not the fastest stop for O’Ward.

Lap 15 showed a big 2.8s lead by McLaughlin over Herta and 5.9s over VeeKay. Power got by VeeKay for P3 and VeeKay has Ericsson and Grosjean breathing down his neck. Ericsson makes the pass on lap 18 and is up to P4 as VeeKay gets trained and falls to P7.

The big tire crossover happened on lap 20 as Power got by Herta for P2 as Herta’s alternates were giving up while Power’s primaries were making speed. The leaders who started on alternates are struggling, barring McLaughlin who has 6.1s over Power. Herta is now 8.8s back from the leader.

The first caution of the day arrived on lap 25 as David Malukas slid into the wall on the exit of Turn 3. He’s done. All the two-stoppers pitted on lap 27; leaving their boxes, Ericsson slid out and into Graham Rahal, who slightly hit Grosjean.

Alexander Rossi stayed out and inherited the lead; he has not stopped. Dixon is P2, followed by Pato O’Ward, Josef Newgarden, Pagenaud, and Kyle Kirkwood. Of the three-stoppers buried behind the two-stoppers, Power is P14 with Palou, Herta, Ericsson, Rahal, and Grosjean in tow in P19.

Ericsson is penalized for the pit lane contact and will take the start from the back of the field, falling from P16 to P25 with Malukas out in P26.

Rossi held the lead on the lap 34 restart; Rahal took P15 off Herta. McLaughlin is under pressure in P12 from Palou. Herta retook P15 from Rahal and is pressuring Power. Rossi vacated the lead on lap 38 and pits to trade primaries for alternates. He returns in P25 as Dixon inherits the lead with O’Ward 0.9s behind. Herta passes Power for P13 on lap 39. Lap 40 and Dixon’s taken the lead out to 1.5s on O’Ward and 2.4s over Newgarden. Newgarden pits for the second time on lap 42. The lead is out to 3.2s on lap 45 as Dixon’s motoring hard. O’Ward pits from P2 on lap 48. Dixon follows O’Ward and pits at the end of the lap.

Dixon, leader of the three-stoppers, settled into P11 on lap 50 while O’Ward struggles and drops to P17. O’Ward lost about five seconds to Dixon with the stops.

McLaughlin pits on lap 65 and Palou stops on lap 66 and returns right behind the Penske driver. With things settled on lap 69, McLaughlin leads the two-stoppers in P3 with Palou, VeeKay, Power, and Herta trailing in P7. Dixon’s in P1 as the top three-stopper with O’Ward 13.4s behind on the same strategy.

O’Ward pits on lap 74. Dixon pits on lap 79 — a giant stint — before stopping as McLaughlin and the three-stoppers move to the front. Dixon returns in P8.

A fighting Jimmie Johnson slowed McLaughlin on lap 88 and as a result, his lead to Johnson’s teammate Palou was cut to 0.6s. Johnson was eventually lapped.

Lap 98 and Herta takes P4 from VeeKay as the fight for the lead rages. McLaughlin won’t be denied. Winner. 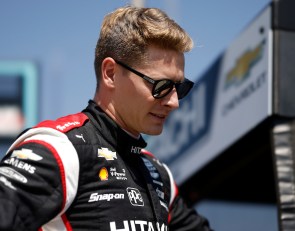 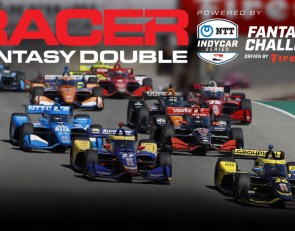