Aston Martin has pulled off another significant appointment by securing the services of Mercedes chief aerodynamicist Eric Blandin for next season.

Blandin (pictured above with Valtteri Bottas), was part of aero teams at both Red Bull and Ferrari prior to joining Mercedes in 2011, and was promoted to the role of chief aerodynamicist in 2017. After more than a decade in Brackley — where he has been part of the team that has won the past seven consecutive drivers’ and constructors’ championships — Blandin will move to Aston Martin in 2022 as the Lawrence Stroll-owned team continues its recruitment drive.

“We can confirm that Eric Blandin will begin working for Aston Martin Cognizant Formula 1 Team next year,” an Aston Martin spokesperson said. “His exact start date is not yet confirmed. The transition from Mercedes AMG F1 Team to ourselves will be an amicable one.”

Aston Martin has already announced the signings of Red Bull head of aerodynamics Dan Fallows as its new technical director and Alfa Romeo chief designer Luca Furbatto as engineering director, as it expands its team ahead of a move into a new headquarters.

The former Racing Point team was rebranded as Aston Martin this year as Stroll looks to turn it into a championship-contending outfit. Martin Whitmarsh joined as CEO of the new Aston Martin Performance Technologies group in September, a move that could yet see current team principal Otmar Szafnauer switch to Alpine. 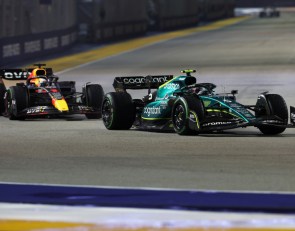 Aston trying to avoid replicating rivals in search of success