Valtteri Bottas says Mercedes’ plan for “worked perfectly” as he secured pole position by winning the Sprint at the Sao Paulo Grand Prix.

Verstappen started from first place after Lewis Hamilton was disqualified from Friday’s qualifying results and had to start from the back, but the Red Bull driver was on mediums for the 24-lap race while Bottas went for softs. With the softer compound, Bottas got the jump off the line to take the lead and held Verstappen off, scoring three points and pole for Sunday’s race.

“It was a good one, everything worked as we planned,” Bottas said. “We opted to start with the soft tire because we knew that the best chance to get the lead today was at the start even if that would make the end of the race very tricky. But it worked perfectly.

“It wasn’t easy until the end, definitely the tires started to be pretty finished, so it was just avoiding mistakes and trying to keep the focus. Today was a good day. I’m also pleased Lewis managed to up to fifth place, so that means there will be plenty of opportunities for tomorrow and we can still, even with the issues this weekend, have a great result tomorrow.”

Your polesitter for Sunday's race in Sao Paulo 👌@ValtteriBottas defended hard for 24 laps to win the Sprint!#BrazilGP 🇧🇷 #F1Sprint pic.twitter.com/fFCi2iK2JB

Although Bottas ensured Mercedes outscored Red Bull by a point on Saturday, the bigger returns are in Sunday’s race and he says Mercedes is well-placed by using a set of softs for the Sprint, even if he won’t reveal the thinking for the main event.

“I can’t tell you! Obviously starting from the pole, hoping to keep the lead and go from there. Tomorrow will be pretty open in terms of strategy for every team, we can start with whatever tire and we’re going to try and make the best plan we can.

“I think we actually used softs (on Friday) because we thought the mediums would be better for the Sprint. But then we realized the soft was a bit better than what we expected so, we started to have a look at it, in terms of using them for the Sprint, even though we knew it wasn’t going to be easy. That means we have plenty of tires for tomorrow, so let’s see what we come up with.” 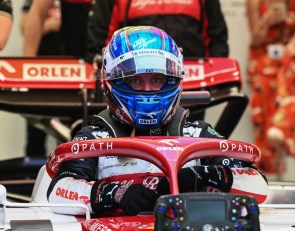