The 2021 Idemitsu Mazda MX-5 Cup presented by BFGoodrich Tires season comes to a close this weekend at Michelin Raceway Road Atlanta. The point standings are so close, the $250,000 championship prize will likely come down to the last lap of the last race — and the same can be said for the $80,000 rookie payout as well.

Coming into Rounds 13 and 14, three drivers are in contention to win the Mazda MX-5 Cup Championship: Gresham Wagner (No. 5 Spark Performance), Michael Carter (No. 08 Carter Racing Enterprises) and Selin Rollan (No. 87 Hixon Motor Sports). Throughout the season, Wagner and Carter have exchanged the points lead, with Rollan always nipping at their heels.

Wagner enters the final event weekend with a 100-point lead after clocking a double-win weekend to sweep rounds Rounds 11 and 12 at WeatherTech Raceway Laguna Seca. His advantage is far from safe, as there are 380 points on offer in each race. But if Wagner can execute Thursday and Friday’s races as he did the last time out, it’s clear sailing to a championship for him.

“It’s not hard to stay focused because frankly, across the first 12 races, I’ve qualified in the top three for every event and I’ve either won or been on the podium for every event,” Wagner said. “That’s not cockiness, but more so confidence in my team to give me a fast car. They always have. I see no reason why that would change.”

As the reigning MX-5 Cup Champion, Carter comes into the finale with less to lose than Wagner or Rollan.

“Having already won and being in second now, there’s less pressure on me,” Carter said. “I have nothing to lose in this situation. Either way, it’ll be fine because I already have a championship to my name. But still, I’d really like to win two!”

Expect a large cheering section for Carter this week; the Georgia Tech student and Savannah-native is on home turf.

“I think the first time I raced there was in 2014, when I was 14, so I’ve been racing there for seven years, which for some kids in the series is half their age,” Carter laughed. “We raced at Road Atlanta on average about three times a year, you figure you average 60 laps a weekend, so that adds up. I definitely feel comfortable there.”

That’s not to say that Wagner and Rollan aren’t equally well acquainted with the 2.54-mile, 12-turn circuit. Wagner actually earned his racing license at Road Atlanta and then completed his first ever car race there.

“It’s really important to hit your marks and be mistake-free at least until the back straight,” Wagner said. “The first half of the lap at Road Atlanta is pretty defining when it comes to lap time and overall pace. The draft, of course, is going to come into play on the back straight. I don’t think it’s as crucial as or as defining as it is at Road America, but it will play a role. Coming to the finish the draft will definitely come into play in the last couple of corners and to the checkered flag.”

“The last time I raced Road Atlanta was I believe in 2017 in Spec Miata,” Rollan said. “There were actually two races that weekend and funny enough, Michael Carter won one and I won the other. I feel like I have turned about 150-200 laps around Road Atlanta, most of those coming from 2012 and 2017.”

All three have experience at Road Atlanta, but there’s one thing Rollan has that the other two don’t: teammates. Hixon Motor Sports will field five cars including new entries from Connor Zilisch (No. 72 Hixon Motor Sports) and Alex Berg (No. 22 Hixon Motor Sports). Both youngsters are making their series debut fresh off of their Mazda MX-5 Cup Shootout in October. Zilisch was the big winner at the event, taking home a scholarship from Mazda valued at $210,000 to compete in the 2022 MX-5 Cup season.

“I think having a teammate is definitely an advantage at this track,” said Rollan. “I’m excited to get to work with one of the shootout finalists, Alex Berg, and the shootout winner, Connor Zilisch! Don’t be surprised to see at least one of those names battling for the win!”

Those rookies will not be in the same fight as Sam Paley (No. 28 McCumbee McAleer Racing) and Chris Nunes (No. 32 JTR Performance Engineering) who are facing off for the 2021 Rookie of the Year title, an honor that comes with $80,000.

The two have been mixing it up at the top of the rookie points all season. Although Nunes is the only rookie to score a win this year (Round Six at Mid-Ohio Sports Car Course) Paley comes into the finale leading Nunes by 150 points. Sitting in third and fourth place, respectively, Luca Mars (No. 41 Copeland Motorsports) and Aaron Jeansonne (No. 24 Provision Motorsports) have outside chances of claiming the title should disaster befall the leaders.

When every Mazda MX-5 Cup race feels like it’s for a championship, you know the actual championship-deciding races will be epic. It’s only natural when Mazda puts up a $250,000 championship purse. 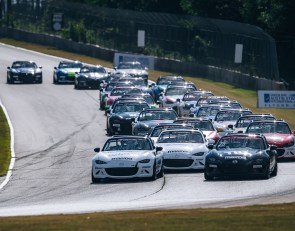