The 2021 FIA World Endurance Championship came to a close in dramatic fashion under the floodlights at the Bahrain International Circuit tonight. Not so much in the overall race, as Toyota claimed another 1-2 finish in Le Mans Hypercar to cap off a season in which the Japanese team won every race with its brand-new GR010 HYBRIDs. Behind though, there was plenty of action and many talking points have emerged.

There were two stories from the Le Mans Hypercar class during the 8 Hours of Bahrain, the first being the No. 7 crew taking the drivers’ title by five points after a season-long duel with the sister car. Jose Maria Lopez, Mike Conway and Kamui Kobayashi didn’t put a foot wrong in this one and had a relatively comfortable run to second. They went unchallenged by Alpine, and were under no pressure to beat the No. 8, which raced off into the lead and aside from a small shifter problem, it was an easy ride.

“Double champions and Le Mans this year — it’s a really nice season,” Conway said after he and his teammates claimed the first Le Mans Hypercar class title. “Congrats to car 8 too — they fought us hard all the way through. It hasn’t sunk in yet.”

The second storyline was Kazuki Nakajima (pictured being hoisted by his teammates on the podium, top) taking a win in his final race as a Toyota factory driver in the WEC. The 36-year-old Japanese driver, who is walking away from his role to spend more time with family, has enjoyed a hugely successful career since joining Toyota’s sports car program. Three Le Mans overall wins, a WEC title and a 17th overall win today capped off a remarkable career.

.@kazuki_info's final time behind the wheel for us. 😢

“It was a beautiful end. It was a tough race for us, but this week we had more pace than last week. I am really happy to be part of this team and I am happy to have won at the end,” said Nakajima, who shared the winning car with Sebastien Buemi and Brendon Hartley.

For Alpine behind it was a day to forget. After Nicolas Lapierre snatched the lead up the inside at Turn 1 at the start, it looked like the French team might have been able to push for a win. But a gear selection issue later in the opening hour forced Lapierre in for repairs which cost the team five laps and any chance of an upset. Instead of challenging Toyota, Lapierre, Andre Negrao and Matthieu Vaxiviere spent the rest of the race fighting back through the field, eventually finishing fourth overall.

Before taking a look at the other classes, GTE Pro needs to be discussed and dissected. After a dull, predictable six-hour race last weekend, this time round it was a dramatic encounter, with on-track battles, strategy gambles, a final-hour tussle, controversy, and a result that leaves us not knowing at the time of writing, if the title has been decided.

Let’s set the scene: A Balance of Performance change before last weekend’s race cost Ferrari a shot at a win, instead the 488s finished a distant third and fourth. This and a pole for the No. 92 yesterday meant the top two driver pairings headed into the final race on equal points. A revised BoP, in favor of Ferrari, before the finale, meant it would be a dogfight today between James Calado and Alessandro Pier Guidi in the No. 51, and Kevin Estre and Neel Jani (joined by Michael Christensen for this race) in the No. 92.

During the race it was tight between both cars, with nine lead changes through seven hours of racing. Into the final hour, the AF Corse crew decided to change just rear tires in the penultimate stop on the No. 51, while Porsche double-stinted their final set to get track position. This left Christensen (trusted to take the car to the flag) ahead and tasked with fending off Pier Guidi. The Italian gradually reeled him in, and was eyeing up a move late in the race. But the pair came together while being lapped by United Autosports’ ORECA LMP2 at the final turn with 12 minutes remaining, Pier Guidi tapping Christensen into a spin.

After the stops Pier Guidi rejoined the race in front of Christensen again and opted not to give the place back in the final minutes, finishing 3.2 seconds ahead of the No. 92, taking the drivers’ title and winning Ferrari the manufacturers’ title too. Confusion reigned at the end, as Pier Guidi did victory donuts, while the Porsche crew in the pit lane were left stunned that AF Corse decided not to hand the lead back.

Before the podium, Jani had words with Pier Guidi and later refused to take his cap off on the podium for the Italian national anthem. It was a messy end to the season, to say the least. As it stands, Pier Guidi and Calado appear to have won the title, but it could change if the stewards opt to take any further action. In any case, Porsche has lodged an official protest, so the messy end to the season in the class is set to linger for a while.

“I understand this is not the way we would like to see the end of the race,” said Pier Guidi, “but I couldn’t do anything — I was blocked, he braked so hard, I didn’t expect anything. I was waiting to give the place back but he pitted. I am sorry for them, but I really couldn’t do anything.” 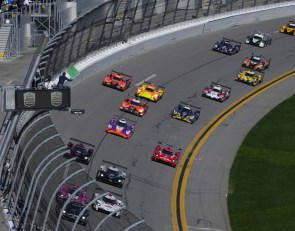