Kalle Rovanpera charged to a sensational debut Acropolis Rally win as the World Rally Championship’s latest “Flying Finn” dominated once again on the final day of the WRC’s return to Greece.

The 20-year-old, who scored his maiden WRC victory in Estonia two months ago, was fastest on the first of Sunday’s three special stages in his Toyota Yaris WRC, and wrapped things up with a win on the closing Power Stage.

Coming into Sunday with a 30.8 s lead over Hyundai’s Ott Tanak, the Finnish phenom found another level to beat the Estonian by 14.1s on the opening 14.5-mile Tarzan 1 test and increase the overall gap to 44.9s.

With third-placed Sebastien Ogier a further 13.9sec in arrears from his Toyota teammate, it seemed to be just a case of keeping it clean, managing the gap, and getting to the finish for Rovanpera — a scenario apparently confirmed by him shrugging off Tanak’s second-stage attack, which gouged 9.9s out of his lead.

But on the Power Stage, which pays out bonus points as well as counting for overall times, Rovanpera pulled out the stops to head a Toyota 1-2-3. It was a sensational way to sign off his second WRC win, and a statement of intent as the series heads to his home gravel for Rally Finland, Oct. 1-3.

“To be honest, I was not maybe the most comfortable coming here to Greece,” said Rovanpera, “but from the start I could push hard. I had the perfect car, so that’s down to the team. And for sure, I hope I have the same speed and feeling in Finland.”

On a day when overnight rain left the opening pair of stages muddy in parts, Tanak had to contend with a faulty windscreen wiper, but got his biggest fright when his Hyundai i20 was reluctant to fire up for the final Power Stage.

“There was an issue at the start, a lot of smoke,” said Tanak. “It only started about two seconds before we had to start the stage. So, yeah, it’s been a tough weekend, but second is OK.”

Ott Tanak had a scare but hung on for second. Jaanus Ree/Red Bull Content Pool

Ogier’s third-place finish, 1m11.3s behind his winning teammate, put the seven-time and reigning champ a big step closer to making it eight.

“I think so,” agreed the 37-year-old Frenchman. “We reached the target we wanted this weekend, which was maintaining our lead. But we actually increased it. All in all, a very clean weekend.”

That increase was thanks to his nearest title rivals, Toyota teammate Elfyn Evans and Hyundai’s Thierry Neuville, suffering early mechanical issues from which they never really recovered. Evans fought back after his Friday gearbox issues, but had to settle for sixth overall and second on the Power Stage, while Neuville battled to eighth at the end after his Friday power-steering issues.

“It’s rallying, and you can never predict these things,” said Evans. “It wasn’t our weekend, but there you go….”

Ogier leaves Greece on 186 points, with Evans 44 back and Neuville 50 in arrears. Three rallies remain, with a maximum haul of 30 points on offer at each (25 for the win and five for the Power Stage).

Hyundai’s Dani Sordo and M-Sport Ford’s Gus Greensmith were the buffer between Evans and the podium places. Sordo’s lonely run to fourth continued on Sunday, the Spaniard finishing 1m49.7s behind third-placed Ogier, but 2m44s ahead of Greensmith.

The latter had been involved in an intra-team battle with Adrien Fourmaux over the opening two days, but the Frenchman earned a three-minute penalty after changing his spark plugs and starting the day’s opening stage late. He fought back to sixth, but was displaced by Evans on the Power Stage.

In WRC2, TOKSPORT Skoda teammates Marco Bulacia and Andreas Mikkelsen started the day separated by just 0.8s. But fastest times by Mikkelsen on the opening two stages ensured the Norwegian would take his third win of the season and extend his WRC2 points lead — this despite having to dial into a new co-driver, Britain’s Elliott Edmondson, and digest pace notes in English.

“It’s looking really good, really positive,” said Mikkelsen of his title chances with just three rallies remaining. “Elliott came into the car and did a great job. Just great by the whole team, and we didn’t hit a stone all weekend….”

Second-placed Bulacia had the consolation of setting fastest WRC2 time in the closing Power Stage and takes over second in the overall points with his best result of the season.

“I tried to drive fast, but not over the limit,” said WRC2 championship leader Mikkelsen. “Marco’s driving well, but I don’t want to risk too much — I have a championship to think about”

American’s Sean Johnston and Alex Kihurani finished 18th overall, and 10th of the RC2 contenders, in their Sainteloc Junior Team Citroen C3. The duo were taking part in their first event since a huge accident on July’s Rally Estonia, and the result was a confidence-building performance ahead of next month’s super-fast Rally Finland. 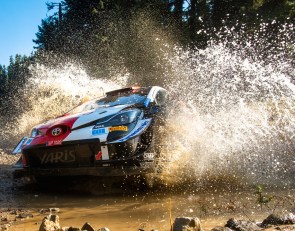 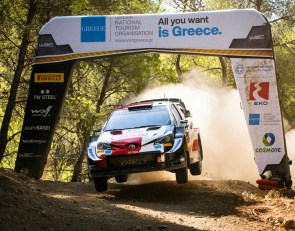 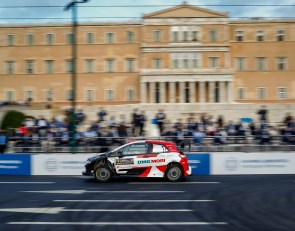