Per ShowBuzzDaily.com, Daytona’s NASCAR Cup Series regular season finale on NBC averaged a 2.25 Nielsen rating and 3.93 million viewers on NBC. That’s down slightly in rating but up a tick in audience from last year’s 2.41/3.87m for this race — also on Saturday evening and NBC.

Rain postponed the NASCAR Xfinity Series race from Friday to Saturday afternoon, where it averaged a 0.43 rating and 670,000 viewers on NBCSN, down from a 0.53/876,000 for last year’s Friday night race on the cable network.

The Sky TV team’s efforts to keep its audience entertained through hours of inaction at the Belgian Grand Prix paid off with an average rating of 0.39 and 637,000 viewers for the marathon telecast on ESPN2 that ultimately featured no competitive laps. While those numbers are well off of F1’s season average U.S. audience, they actually compare quite well with last year’s race on the same weekend which, despite running without weather challenges and airing on The Deuce’s big brother ESPN, averaged 0.42/675,000. 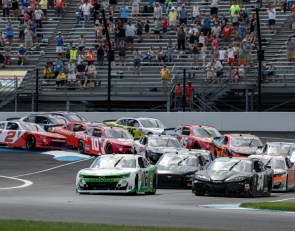