iRacing has plans to build an LMDh car in the near future, Steve Myers — the company’s executive vice president — revealed in a live stream for a charity event the service was hosting. iRacing also revealed that rain will soon come to the sim, with the team aiming to have an in-house, private version of the system ready by the end of the year with a public release after that.

“We definitely have plans to build an LMDh. The prototype world these last few years has been so difficult to understand what the direction it was going in and we really wanted to take our time to make sure that we chose cars that were going to have some life to them,” Myers said during a Q&A session.

“We do know the tendency sometimes of getting a car and within two to three years it’s been retired, which is frustrating for us as much as it is for our customers. LMDh is going to be utilized in North America and the rest of the world and we’re really excited about that and we’ve been speaking to some of our partners already about it. We definitely have every intention of building one,” Myers said.

Cars being retired or tracks being remodeled shortly after they are released on iRacing has become such a trend that the community has nicknamed it the “iRacing Curse.” The Ford GT GTE and the entire Red Bull Global Rallycross Series are two prominent victims of the so-called curse.

iRacing addressed the need for a new prototype, particularly an LMP2 car, with the release of the Dallara P217 in late 2020. Before that, the latest LMP2 car available in iRacing was the HPD ARX-01c released in 2011. With this announcement, iRacing seems confident that they will be able to produce an LMDh car before that car has seen most of its days on track.

Being in a position to have a car on the sim that still has a decent amount of life ahead of it was one of the difficulties in pursuing a Super GT car. Myers also explained that in addition to navigating the evolving — and now abandoned — Class 1 regulations between Super GT and DTM, iRacing was unable to acquire the data needed to build a Super GT car.

In addition to the announcement on LMDh, iRacing gave a new timeline and revealed new details on its long-anticipated rain project.

“It’s at the point now where we’ve started to bring in, not only the core engineers who are working on [rain], but the entire team, the artists, the VFX people, multiple rendering engineers, our dynamic track engineer — it’s a whole team effort now,” Greg Hill, iRacing’s senior vice president and executive producer, said during the live stream.

Both announcements were made during a live stream for the Four Hours of Charlotte Motor Speedway, a charity event iRacing was hosting along with NASCAR crew chief Chad Knaus to raise money for the National Multiple Sclerosis Society. Myers posted on Twitter that donors had raised over $45,000 for the cause as of this morning. 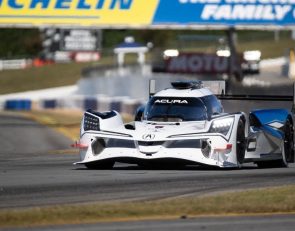