Kyle Busch earned his historic 100th NASCAR Xfinity Series victory Saturday at Nashville Superspeedway in epic fashion – starting on the pole position, leading a race-high 123 of the 189 laps and bettering the field on three restarts in the closing 20 laps of the Tennessee Lottery 250.

For the second race in a row Busch had to hold off veteran Justin Allgaier on a series of late race restarts. The margin of victory on Saturday was a mere 1.11-second – the two dueling side-by-side in the final laps exchanging the lead seven different times in the final stage of racing. The victory makes Busch a perfect 3-for-3 in Xfinity Series starts this season and it’s the second time he has won from the pole.

Appropriately for a Father’s Day weekend race, Busch was immediately greeted in Victory Circle by his six-year old son Brexton.

“I remember growing up as a kid and watching [NASCAR Hall of Famer] Mark Martin win every week in that 60 car, just the domination he had,” said Busch, driver of the No. 54 Joe Gibbs Racing Toyota. “And he’s number two with 49 wins.

Moments later, after receiving the famed guitar awarded to Nashville winners, Busch strummed the strings but he did not smash the guitar as he infamously did in 2009.

For his part, Allgaier left no doubt he was tired of being the race bridesmaid to Busch.

“Running second sucks, I’m not going to lie to you,” said Allgaier, who had both his daughters names – Harper and newborn Willow – on the car and at the track in recognition of the Father’s Day race weekend.

“When we took the lead from Kyle I thought we were good, we were able to drive away. But then all those restarts at the end, he just held me down really hard in the middle of [turns] three and four and we got loose and I think that was the difference-maker, after that we just didn’t have the speed after that.

“Again, just proud of my guys – to bring two fast race cars two weeks in a row to have a shot at it and have it come down to late in the races is a big deal. We’ll keep digging.”

The race marked the first time the series had competed at the 1.333-mile concrete Nashville track since 2011. By all accounts, this latest edition of close racing and dramatic finish was well-received by the fans.

Busch’s JGR Toyota teammate Harrison Burton finished third followed by Allgaier’s Chevy teammate Josh Berry who had a triumphant, if busy afternoon. He started 22nd but raced hard enough to earn points (eighth place) at the end of Stage 1. An unfortunately timed pit stop late in the race – a caution came out while he was on pit road – put him another lap down with just over 40 laps remaining. But the Tennessee native still rallied to a fourth place finish – his fourth top 5 in 13 races this year.

Hard racing between @J_Allgaier and @KyleBusch ends with a multitude of front runners collecting damage! pic.twitter.com/2TUWTRuJqi

The current Xfinity Series championship leader Austin Cindric finished 32nd after being collected in an accident toward the front of the field, late in the race. He led every lap in Stage 1 to earn his series best seventh stage victory. The finish is his worst of the season.

“Pretty hard hit right at the start/finish line,” said Cindric, driver of the No. 22 Penske Racing Ford. “I hate it for all the Penske guys. We had made great strides after practice, obviously. Winning the first stage was great but kind of lost handling of the car. I learned a lot today. But kinda battling back through the field… it was not our day.”

Despite the disappointing finish this week, Cindric remains the championship leader – 90 points over Allmendinger. With 11 races remaining until the Playoffs begin, Jeremy Clements holds a 48-point advantage over Brandon Brown for the 12th and final Playoff position.

The NASCAR Xfinity Series races next at Pocono Raceway in a double-header Sunday afternoon with the NASCAR Cup Series in the Pocono Green 225 (noon ET, NBCSN, MRN, SiriusXM NASCAR Radio). 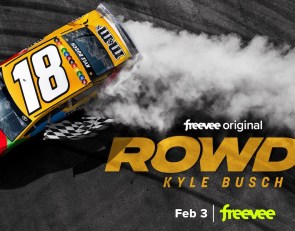