INTERVIEW: Reddick gets comfortable with reality

INTERVIEW: Reddick gets comfortable with reality

Tyler Reddick and his Richard Childress Racing team are more in tune with reality this season, and it has them on the path to the playoffs. Ask Reddick what he and his No. 8 group have fixed that held them back their rookie year, and he’ll admit it was trying to do more than what his Chevrolet was capable.

“We were trying to take cars that weren’t where they needed to be pace-wise, or even what we were bringing to the racetrack,” Reddick tells RACER. “On those weekends when we were going to run 15th or had good days going, we were relentless in trying to magically turn it into a car that was going to outrun the guys that had been dominating the race all day long.

“That is almost impossible to do in any kind of motorsports, so we had to work on being more realistic. It was something we talked about in the off-season. We didn’t get the year off on the right foot doing that because there were some races where we had good speed or felt good about our cars, and it’s very easy to fall back into that flawed mindset, and then we crashed, or something took us out. Yeah, just being more realistic, understanding what we’ve got, and being smart and letting other teams do what we were doing last year: a lot of going for broke or trying some crazy adjustment.”

The strategy of fighting it out with what they’ve got instead of trying to reinvent the wheel during a race has worked out. Reddick is 13th in the standings halfway through the regular season, which would qualify him for the playoffs. A year ago, Reddick was 18th in points.

Reddick did not make the postseason in 2020. Always on the outside of the bubble looking in, his team never put the consistency together to take a position on points.

Fortunately, the playoffs don’t start right away because, as mentioned, he didn’t get off the best start in 2021. The execution simply wasn’t there. Reddick had two DNFs in the first five races and two top-10s through the first 10 races.

Tyler Reddick (No. 8 Chevrolet) started on pole and finished ninth in a rain-plagued race at Circuit of The Americas. Thacker/Motorsport Images

It wasn’t until about a month ago he and crew chief Randall Burnett started “doing the stage points deal right,” and now they’re hitting their stride at the right time. Reddick has five top-10 finishes in the last six races, including his first pole at Circuit of the Americas.

“We’ve always had a very good line of communication,” Reddick says of he and Burnett. “I think the big thing is just understanding, what are we here to do today? We know how to get aggressive and get after it, and in the Xfinity Series, we could. There was no penalty for picking the back of the car up too much and getting draggy. Here (in Cup), every adjustment is kind of a trade-off with a tighter field and downforce versus horsepower the Cup cars have. Drag and those things come into play a lot more.”

Reddick is also putting in the work off the track. He’s completely changed his fitness routine and has dropped at least 30 pounds. While he isn’t sure how it might help behind the wheel, it’s helped his confidence and given him more energy to be ready on race day.

“I just don’t think you realize as you’re wearing down in the car that you are wearing down,” Reddick said. “The heat can get to you sometimes. But it’s a slow drain, like having a leak in a tire. When I gained weight a couple of years ago, I was like, ‘I’m not gaining weight. I’m not getting big. I’m not getting fat.’ Then one day, your jeans don’t button anymore. You don’t realize it until it’s almost too late, and I think that’s what’s happening in the car and why I don’t notice a huge difference yet.

“I didn’t get a new insert until COTA because I said I didn’t need it. Then when they re-poured my insert, and I saw how much material they were going to have to add, I was like, ‘Well, maybe that’s why I’m getting just as tired as I was when I was bigger, because I’m moving around in the seat a whole lot and I didn’t realize it.”

Charlotte was the first race where Reddick had a new insert to fit his new body. He qualified 15th, then finished eighth in Stage 1, fifth in Stage 2, sixth in Stage 3, and was ninth at the checkered flag. The performance moved Reddick up two spots in the point standings.

Reddick battles William Byron (No. 24 Chevrolet) during the Coca-Cola 600 at Charlotte. Harrelson/Motorsport Images

Austin Dillon sees the changes in his teammate. Dillon understands the adjustment to the Cup Series and how Reddick needed to settle in.

“I think the first year is off adrenaline coming off a championship (in 2019), and you get halfway through the year like, ‘Holy cow, this is the Cup Series,’ and there’s a whole other level,” Dillon says. “It took me a couple of years, and you have to know it takes time. He’s really coming into his own.

“He’s had a good streak here having some great finishes, but it’s never been a work ethic thing with him. He puts in the effort from all sides, and it’s nice to have someone who helps push me.”

Cup Series competition was an eye-opener for Reddick. After downloading how his rookie season went and what he could do better this year, Reddick saw potential for improvement everywhere. He is also trying to understand how to race his competitors, and be cleaner on pit road.

“Just covering all the details,” Reddick says. “You can’t take a good car and a good group of people and just will its way to the front like we could on the Xfinity side. All those details are the difference. I thought I was applying time and energy toward it, but until I got to the off-season and started working on it for this year, I didn’t realize how much I was leaving on the table.”

The work isn’t done, though. According to Reddick, making the playoffs is a must.

“It should have happened last year, but the details I thought I was covering, I wasn’t,” he says. “We thought we were doing the right things, and we had more to do. It’s not an excuse; we didn’t accomplish what we set out to accomplish. It was right there. We were reasonably within striking distance last year, but we didn’t do it.

“As much as it was a negative last year, it made all of us hungry in the off-season and put the pressure on, especially when we started the year off as bad as we did. Like, ‘All right, we need to get this together right now.’ We responded well from how bad the year started, so it’s nice to have that in our back pocket and knowing that when that adversity does come, we can respond and get back in the right direction.” 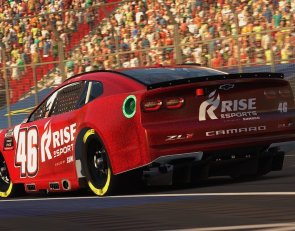