For the second consecutive year at the Indianapolis Motor Speedway, Team Penske’s four-car effort missed the cut for the Fast Nine qualifying group.

“It’s surprising to all of us,” said Will Power, Penske’s 2018 Indy 500 winner, as the last 50 minutes of qualifying arrived and was left outside the top 30 guaranteed spots in the field. “Clearly missing something here, but we have great race cars. To be honest, we really do. We have great race cars. So if we can keep it clean on race day, I think we’ll be good, but first we’ve got to get in the show.”

Although Penske’s engine partners at Chevrolet also struggled in qualifying, Ed Carpenter Racing was a happy outlier as it placed two cars inside the Fast Nine, highlighting the difference in performance between ECR and the rest of the Bowtie’s runners on Saturday.

Within Team Penske, rookie Scott McLaughlin led the squad in P17 with an average speed of 230.557mph in the No. 3 Chevy. Josef Newgarden made multiple qualifying attempts and was forced to settle with P21 in the No. 2 Chevy (230.071mph), and continuing the theme, Simon Pagenaud closed the day in P26 with the No. 22 Chevy (229.778mph).

It's unfortunate that we didn't have another shot today. @IMS just means so much to me, and I'm confident we'll come back stronger tomorrow. 👊🏁

Power was the 18th driver to qualify on Saturday, and after his four-lap run, the 2018 Indy 500 was P18 and slid down the order until he was outside the top 30. Speaking after the first attempt, Power seemed to have a feeling the day could turn in an unfortunate direction.

“We’ve been about that pace all week,” he said. “I ran about the same setup as Scott (who) ran a nice amount quicker, so I don’t really know what else to do. Maybe we’ll try run again and get a little bit more out of it. Hopefully, we don’t have to be in the bumping part of it. Hopefully (we) can get a bit better than that. I was pretty much wide open the whole time and just haven’t quite got the speed right now.”

Newgarden made a second qualifying attempt the moment the track opened for free runs and did not improve his position. After his first qualifying run, he appeared to be resigned to charging through the field over 500 miles on May 30.

“That’s pretty good run from us,” Newgarden said. “I felt happy with it. Qualifying’s one part of it, seems like we’re off a little bit. The race is another story. So we’re trying to work through it this weekend, get the best we can. Everyone’s working really hard at Team Penske … I don’t know how much more we can find. We have a fast race car. It’s just this weekend, so far, hasn’t been when we wanted.” 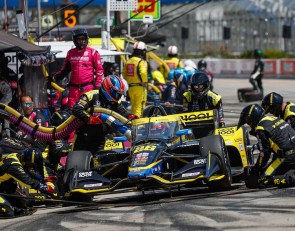