Citing IndyCar Rule 9.3.1, Improper Conduct, the series judged RLL’s action of spreading Takuma Sato, Graham Rahal, and Santino Ferrucci across the front straight at half speed — which led to contact behind them between Colton Herta and Scott McLaughlin, and an ensuing caution period just minutes into the start of practice — as deserving a 30-minute sit on Friday morning for all three drivers at the start of the Fast Friday practice session.

Team Penske opened the month of May on Tuesday morning with a photo-op where its four cars fanned out on the front straight, but it did not interrupt other teams from practicing. RACER confirmed the Penske outfit informed the series — owned by Roger Penske — that it would be orchestrating the four-car procession on the opening lap.

RACER also understands the reason for RLL’s photo-op penalty is due to the resulting traffic jam, as the three cars had Paretta Autosport’s Simona De Silvestro and Penske’s McLaughlin stuck behind them running at a reduced pace, which caught the charging Herta by surprise, and led to the Andretti Autosport driver flying around the outside of McLaughlin and clipping the wall and the Penske car in avoidance.

It’s unclear whether RLL informed and cleared its three-wide plan with the series. A call to the team seeking an answer was not immediately returned.

Sato was ninth fastest on Thursday (224.232mph) while Rahal was down in 26th (221.748mph). The best of the group was Ferrucci, who claimed third fastest (224.99smph) shortly before crashing in Turn 2. In the case of Ferrucci, whose status and eligibility to drive on Friday was unknown at the time of writing, the extra off-track time Friday morning could prove to be useful as the No. 45 Honda undergoes final repairs and technical inspection. 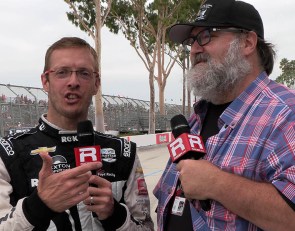 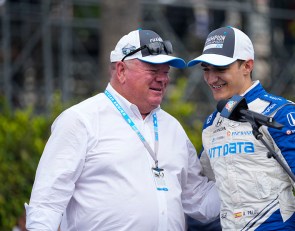