Kuno Wittmer knew the speed was there. It was just a matter of making the right move at the right time.

The right time came with 15 minutes remaining in Saturday’s Mid-Ohio 120, the two-hour IMSA Michelin Pilot Challenge race at Mid-Ohio Sports Car Course. That’s when Wittmer powered the No. 13 AWA McLaren 570S GT4 past Matt Plumb’s No. 46 Team TGM Chevrolet Camaro GT4.R and into the race lead. Wittmer, co-driving the No. 13 McLaren with Chris Green, went on to win by a narrow 0.417s over the No. 16 Wright Motorsports Porsche 718 Cayman GT4 Clubsport driven by Ryan Hardwick and Jan Heylen.

It’s the second win this season for the No. 13 AWA entry. Wittmer and regular co-driver Orey Fidani captured the four-hour season opener at Daytona International Speedway. Fidani bowed out of competing this weekend to remain home for the impending birth of his baby.

“We missed Orey this weekend,” Wittmer said after earning his seventh Pilot Challenge win. “I said on the podium that this win is dedicated to him and his newborn baby coming anytime soon.”

Starting second to the No. 16, Green overtook Hardwick for first place less than five minutes into the race on the 2.258-mile, 13-turn road course. Questions arose, however, when Green made a surprising pit stop for fuel only a half hour into the event.

“We wanted to keep it in clean air, we wanted to be in control of the race today, so ultimately we put ourselves in that position and the car was great from the get-go,” Green explained after his second series win and first time in a Pilot Challenge car since the end of the 2019 season. “Throughout the stint as we were starting to save fuel and kind of focusing on the long run, the team decided to come in because we had an opportunity to pit and get out in clean air and avoid some of the TCR cars and lapped traffic. … It worked out well, very well.”

Green was in third place in the Grand Sport (GS) class when the first full-course caution came out with 68 minutes remaining. Wittmer took the wheel of the No. 13 on the ensuing pit stop under yellow, passing Heylen for second place down the back straight with 46 minutes to go before pulling a similar maneuver for the decisive pass on Plumb.

Heylen pressured Wittmer late but couldn’t make a strong enough move to take the lead, settling for second in the No. 16 Porsche. Bryce Ward and Alex Udell finished third in the No. 57 Winward Racing Mercedes-AMG GT GT4.

“It felt great to have some pressure from behind,” Wittmer said of his battle with Heylen. “It felt good racing hard with somebody who’s a clean driver.”

“There’s no better racing on the globe right now than IMSA. I’ve said that for 10 years,” Wittmer said. “You match everything up with the Michelin tires and some manufacturers that have a head on their shoulders, and you get amazing racing that doesn’t even come close to anywhere else.”

In the Touring Car (TCR) class, Hyundai returned to the top of the chart, snatching four of the top five finishing positions — including class winners Parker Chase and Ryan Norman in the No. 98 Bryan Herta Autosport with Curb-Agajanian Hyundai Elantra N TCR. It brought the first Pilot Challenge victory for the Elantra model, which is running alongside its Hyundai Veloster N TCR counterpart this season.

Chase had a healthy battle with the No. 19 van der Steur Racing Hyundai Veloster for the first half of the race, battling for the lead on several occasions. The No. 98 passed the No. 19 for first place just before the full-course caution at the midpoint.

Norman took over on the pit stop in second place behind the No. 27 Copeland Motorsports Hyundai Veloster driven by Tyler Maxson. Norman bided his time, saving his tires before working past Maxson through the Turns 4-7 section with just under a half hour remaining.

“Halfway through that run, he ended up coming back to me,” Norman said. “I found a good spot to make the move and once we did that, it was set sail after that.”

Norman held off teammate Michael Lewis in the No. 77 BHA Hyundai Veloster by 1.02s at the finish line. Ryan Eversley brought the No. 94 Atlanta Speedwerks Honda Civic FK7 TCR home third. Hyundais also grabbed fourth and fifth places by the No. 27 Copeland entry and the No. 33 BHA Elantra, respectively.

“The car was super good and it held on for the entire race,” said Norman, who added his fourth career win. “We’ve been working so hard as a team to get this car where it is right now. We’ve made so much progress and we’re still going to make more progress. We’re super happy with this result.” 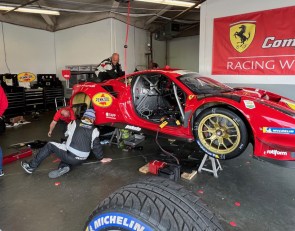