Cindric finished 28th and completed the race, but left lamenting the mistake he made when he spun Ryan Newman on lap 142 in Turn 3. Newman was on the outside of Cindric, who had Kyle Larson to his inside.

Bowman ‘made us look goofy’ on final restart - Logano

“It started off on pit road,” Cindric said. “I got shoved in the left-rear by the 5 (Larson) off of pit road, and that put us three-wide going down the backstretch with the 6 (Newman), who was already on the racetrack. At that point, I should have just bailed.

“It’s one of those deals where you’re on colder tires, and you’ve got a car with more laps on his tires, and you’re kind of hoping that you can shuffle him out. When you’re racing for 20th, it’s probably not the right thing to do, especially when you’re faster than the guys you’re around. It’s just one of those deals, something that I know and should have done better but didn’t, and now I’m mad at myself for it, but that’s racing.”

Cindric will move into the Cup Series full-time next season with Wood Brothers Racing, taking over the No. 21 Ford Mustang from Matt DiBenedetto. Team Penske is running Cindric in select races this year in a fourth car to prepare for his promotion. Cindric’s full schedule is unknown as the organization goes through selecting races that will give the 22-year-old a good taste of what he’s in for beginning in 2022.

… and that's not what you want if you're @RyanJNewman. @AustinCindric gets into the No. 6 machine entering Turn 3. pic.twitter.com/gLOqMEyHmA

Richmond was Cindric’s third start following the Daytona 500 and Atlanta Motor Speedway. Despite being caught in the vicious last-lap crash of the 500, Cindric finished 15th at Daytona and was 22nd at Atlanta. He has completed 918 of the 925 laps thus far in his three Cup starts.

“It’s an interesting race,” Cindric said of Richmond. “I definitely chose the wrong time to make a rookie mistake getting into the 6. That’s definitely on me, and that was a really vulnerable time for our strategy, and that put us behind the eight-ball all day. We tried to do some strategy to get us back and we ended up putting ourselves another lap down. By the time stage three rolled around, we were able to make some good adjustments, and our Verizon 5G Ford Mustang was really good.

“I wouldn’t say we were top five good, but I think we were good enough to run inside the top 10, top 15, so there’s a lot of positives. I drove up to P20 under green, so lots to learn, but definitely wish I could get that stage two mistake back.” 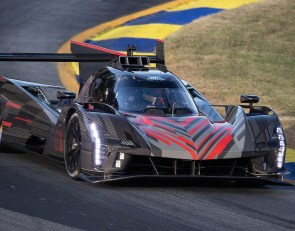