A trio of race winners emerged in a pair of feature races that closed out the opening day of 2021 HSR competition Thursday at the HSR Spring Fling at Sebring International Raceway.

Treffert scored overall and Porsche class Sasco Sports honors for the second-straight running of the HSR Spring Fling in his No. 141 Speedconcepts 1974 No. 141 Porsche 911 IROC Prepared by the 901 Shop.

Frank Beck finished third overall and in the competitive Porsche class in his Becks European 1972 No. 59 Porsche 914/6.

Photos: Friday and Saturday at the VRG Turkey Bowl

International Sasco Sports honors went to Barry Payne in the 1999 No. 9 Lotus Elise. Payne was joined on the International division podium by Gary Wilt in the 1969 No. 102 BMW 2002. Both entries are prepared this weekend by Heritage Motorsports. 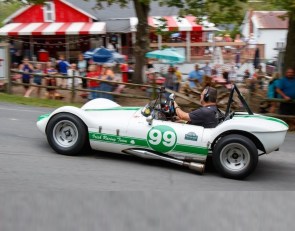 Photos: Friday and Saturday at the VRG Turkey Bowl

Next year could well be a banner year for the H-Modified Racing Club, whose vintage cars and drivers already are making travel plans to (…)