Hamilton sees Red Bull as ‘a different animal’ in 2021

Hamilton sees Red Bull as ‘a different animal’ in 2021

Lewis Hamilton says Red Bull looks poised to provide a stronger challenge to his Mercedes team ahead of the 2021 season due to its experienced driver line-up and strong launch car.

Max Verstappen topped the opening day of testing and completed the most mileage, while Sergio Perez posted the quickest time of the final morning. That comes against a backdrop of Mercedes losing early ground with a gearbox issue and having to adapt to a difficult rear end on the W12, and Hamilton says even without his own team’s challenges he is expecting a lot from Red Bull.

“They can be favorites if they want — they’re looking strong. I don’t really focus on that kind of stuff,” Hamilton said. “I think they’ve had some really good running, both their drivers are looking quite strong, they’re going to be a different machine or animal this year, I think, with a real good strong line-up of the two drivers and a really good car.

“Having seen them winning the last race you can only assume they’re going to be right there — if not at the front — of the first race and it’s going to be a great, long battle with them throughout the year.”

Rather than being concerned about the strength of Red Bull or any potential problems for his own team, Hamilton says he is relishing the potential of a competitive start to the year.

“I don’t waste time worrying — that deters you from finding the solution, so we’re working hard and focusing through getting this short amount of testing we have and trying to be as efficient as we can with it.

“I think it’s better when it doesn’t go smoothly now and goes smooth when we get into the racing scene. This is the perfect time for us to find the issues and have the problems, so I welcome that. I think everyone is just keeping their heads down; no one is particularly fazed by it. We’re a multi-championship winning team and we know how to pull together and keep our head down and focus on the job.

“Without doubt it is quite impressive to see the speed of some of the other teams. Red Bull are looking particularly strong, it’s great to see McLaren looking strong, and also Renault (Alpine). I’m excited (by that) also, as that means more fun.” 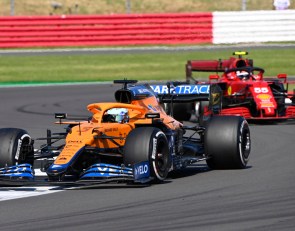