Next time you see the biggest, tallest sports car superfan at an IMSA race, be sure to thank him for making the event possible.

Texas native Dustin Hesseltine (pictured above with with Scotland’s Ryan Dalziel, left, and Canada’s Daniel Morad) has become North American endurance racing’s most unlikely savior over the last year or so as COVID-19, and the resulting international travel restrictions and immigration obstacles that followed, jeopardized the WeatherTech Sports Car Championship’s ability to move forward with its races.

Wind the clock back a few years, and Hesseltine’s towering presence and grand smile were easily found in IMSA paddocks. Clutching a giant, hefty binder filled with racing photographs, Hesseltine was best known for the befriending teams and drivers who made plenty of time to sign pounds of images he’d captured at recent races.

Hesseltine has a hefty collection of signed images from races. Marshall Pruett image

A natural born charmer, Hesseltine became a fixture in his favorite domestic sport, and with approximately 40 percent of IMSA’s series represented by international racers, he also made a vast number of new friends from Europe, Asia, and abroad.

By chance, fate, or simply good fortune, Hesseltine found his calling by blending his education as a lawyer specializing in immigration, with the needs of a countless sports car drivers, mechanics, engineers, and team owners who found themselves lacking the necessary work visas or border crossing paperwork during the pandemic.

While Hesseltine had a steady amount of paddock-related work coming his way prior to COVID-19, he’s been among the busiest people in the sport, with a phone that’s always on, always charged, and ringing at the oddest hours as emergencies pile up for clients new and old.

“I knew when I was an undergrad at SMU that I wanted to be involved in the business side of motorsport — loved the sport all my life, way too tall and generously proportioned never fit in the car,” he told RACER. “It was 2016 at Road America watching the Continental Tire series race in the rain with (Scotland’s) Robin Liddell, when he said, ‘Dustin, if you want to be everybody’s friend, learn this immigration stuff, because the guy that’s doing it now can’t take care of all the people in IMSA with needs.”

Citing sports car champion Tommy Kendall and IndyCar champion Danny Sullivan as mentors on the business of racing and the various behind-the-scenes roles that are played, Hesseltine added more education from Pepperdine University and took Liddell’s advice to heart.

“I’ve always prided myself on having a really great network, both in racing and in a legal profession, so I really leaned on my networks to educate me about the rules as far as non-immigrant work visas were concerned,” he said. “And how you can apply those to not only drivers, but also the team side with engineers, all those essential personnel would have to come into the country for a race.

“And as I kind of got some really, really prominent clients pretty early on Max Angelelli, Ryan Briscoe, Renger van der Zande, who was one of my first guys, I put my knowledge of the racing industry together with the legal and immigration side, and fit those square pegs into round holes.”

Thanks to his familiarity within sports car racing circles, Hesseltine has become the go-to advisor for ever-changing border and travel restrictions, quarantine requirements, and all manner of insights on how racers should navigate the world in order to make each IMSA race.

“It’s just been one driver leading to another, or one team recommending me to another; I don’t even have a website,” he said with a laugh. “It’s basically, ‘Hey, Dirk Muller told me to call you,’ ‘Simon Pagenaud told me to call you.’ If I were just a regular lawyer, all the guys that I’d be lining up to see at an autograph session are now calling me for legal advice, and it’s great. It’s hard to believe, really.”

As the pandemic worsened and IMSA was forced to halt its activities last March, new series president John Doonan — who used Hesseltine’s services while running the Mazda Motorsports DPi program which features multiple European drivers — reached out for wide-scale assistance. With the WeatherTech Championship looking to resume its season in July, intensive efforts were needed to ensure that 40 percent of the paddock could land and race in America.

“Working with Mr. Doonan and IMSA with NASCAR, and then reaching out to our friends at the U.S. Department of Homeland Security and Customs and Border Protection, we were able to carve out an exemption for people that are providing a valuable economic service in the United States,” he said.

“You’re allowing people to go back to work, because with how most sports car teams work, most originate from the U.S., but there’s a lot of international talent, highly specialized talent, that completes the team. If they aren’t here, many of the teams can’t race, and then everybody’s out of work. So once all the parties got that important part done — full credit to Mr. Doonan and his team at IMSA about coming up with safety protocols in order to satisfy the demands of Department of Homeland Security — we were able to outline a situation where we could let people in safely and not miss any races.”

Even with high-level processes in place, Hesseltine continues to spend an exceptional amount of time helping sports car racers in panic situations, including a few who encountered road blocks before reaching Daytona International Speedway. But with the field of 49 cars set and a 24-hour race ready to be held, IMSA’s superfan-turned-immigration savior can turn his ringer off and cheer for friends and clients for the rest of the weekend.

“Last week especially, I was getting calls at 2:00, 3:00 in the morning, with, ‘I’ve got an issue at an airport, they aren’t letting me on the plane to fly over, can you help?’” he said. “I do take it personally for them, and just knowing that I get to be a part of the team that makes these races happen for a lot of drivers and people on pit lane means a lot to me. I love sports car racing as much as anything else in the world.” 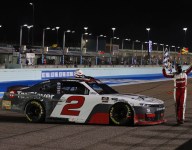