Like most major sporting venues in California, the organizers of Long Beach’s annual Grand Prix event held on its city streets can’t predict what the future will hold for event access and permissions in 2021.

Amid another round of tightening restrictions on public gatherings as COVID-19 continues its deadly march throughout the country, Grand Prix Association of Long Beach president Jim Michaelian says his team is moving forward like the NTT IndyCar Series and IMSA WeatherTech SportsCar championship weekend will happen in approximately 18 weeks, and working on a Plan B.

“We’re still scheduled for April 16-18, but (there’s no telling) where California is going to be in a few months with the pandemic,” Michaelian told RACER. “We would be remiss if we weren’t exploring other options that might be available to us; I’m engaged in that process at the present time.”

Considering the importance of the Long Beach GP in generating revenue for the city and local businesses, running the event without ticket-buying fans and vendors who create positive cashflow is untenable.

“(Running) this in April with no spectators or even a limited number would be hard to justify,” said Michaelian, who was forced to cancel the race in 2020 when an alternate date could not be secured. “Unlike permanent facilities, we have to build it and tear it down, and that takes a lot of time to do. We had last year’s race about 70-percent built when we had to cancel everything. As a consequence, we need to have a reasonably good spectator (count) when we conduct the event.”

Looking to the remainder of the IndyCar and IMSA calendars, RACER understands the weekend of September 25-26 has been floated as an alternate date. IndyCar’s current season finale, in place for Sept. 18-19 at California’s WeatherTech Laguna Seca, could shift five hours south to Long Beach, if approved. IMSA, which visits Laguna Seca the week after Long Beach’s current April date, has no racing scheduled in September as it waits for the October 9 Petit Le Mans finale at Road Atlanta. 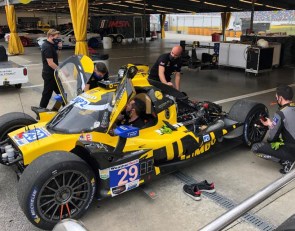