One of SCCA’s oldest classes, E Production, has seen a lot of changes over the years. It has been a part of every Runoffs event in SCCA history, and its legacy continued at the 57th SCCA National Championship Runoffs at Road America. Twenty drivers qualified, most running Mazdas or BMWs in a field once dominated by British sports cars.

Prather grabbed an early lead but Brakke got caught up in the charge for the front and was shuffled back several positions. Hainsworth slotted into second, with Reynolds third. Tim Schreyer of Dubuque, Iowa, moved up into fourth from his fifth-place starting position in the No. 28 Schreyer Motorsports/Hoosier 1987 BMW 325is.

There was no settling down early in this race: Reynolds’ pace dropped Hainsworth back to third, while Cameron Wogrin of Littleton, Colorado, piloting the larger and heavier No. 181 1997 BMW 328is, soon got by Schreyer, moving into fourth.

It was a three-way race until the third lap, when Hainsworth tried to get around Reynolds and went wide in Turn 8 in a cloud of tire smoke.

“I locked up the brakes in Turn 8 and just sailed off,” Hainsworth said. After that I just tried to run consistent laps and not make any more mistakes.”

With Hainsworth now about 5 seconds back, Prather and Reynolds drove away from the rest of the field.

Meanwhile, the battle for the spots just off the podium raged behind the leaders. Jon Brakke was looking for a way to get his Miata around the larger BMWs, but the six-cylinder engines of the German cars made it hard to get a good run. Brakke made it around Schreyer in the sixth lap, taking up fifth place behind Wogrin.

On Lap 8, Wogrin went wide in Turn 8, letting Brakke around to run away with fourth place. Schreyer and Wogrin now battled for the final spot in the top 5, trading the position back and forth over the next several laps.

Up front, Prather was working on shaving hundredths off his lap times, setting the fast race lap of 2m29.047s. He continued to drive near-perfect laps, and at the checkered flag, it was Prather with 1.572s in hand over Reynolds, with Hainsworth another 20 seconds down in third.

“I haven’t been here [in Victory Circle] since 2008,” Prather reflected. “I started my business in 2009 and focused on building the business. My engines not only power my own car, but also my friends’, Matt Reynolds, John Hainsworth, and Jon Brakke. My focus is always on my customers.”

Reynolds had a plan to win, but just couldn’t find a way to take the lead from Prather. “I could hang with Jesse in the first half of the race,” Reynolds said, “and I was studying him for mistakes. But about halfway through I started losing the tires.

“Jesse ran a perfect race,” Reynolds continued. “Once he pulled the gap, I didn’t have anything for him.”

Hainsworth was glad to make the podium again. “Any time you’re out there with three three-time national champions and you can run with them, you feel great,” he said after the race.

Because EP has been around for decades, there are a great number of legacy cars that remain competitive. One of those earned this year’s Sunoco Hard Charger award as Aaron Downey of Seal Beach, California, recovered from qualifying challenges to start at the back of the 20-car field. Downey drove his No. 5 1976 Mazda RX-3SP up to 7th position to prove that the older cars are still competitive.

Live, online video coverage of Runoffs races, presented by Mazda, is available throughout the three days of competition at SCCA.com/live along with an audio race call—supplied by the Super Tour Radio presented by Hoosier Racing Tire broadcast team—and live timing and scoring for each National Championship race. 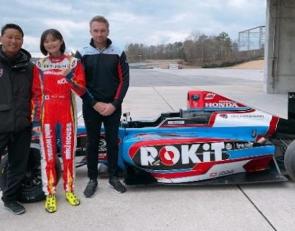 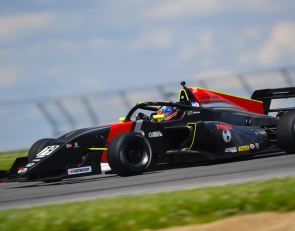 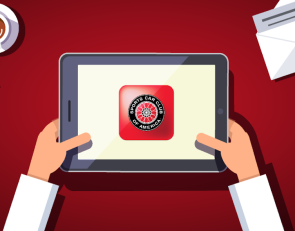