Stacy was running third behind a pair of Mercedes-AMG GT GT4s with 26 minutes remaining in the two-hour event when the No. 57 Winward Racing entry driven by Alec Udell made contact with race leader Dylan Murry’s No. 35 Riley Motorsports Mercedes at Turn 4. Murry spun off, while Stacy quickly closed on Udell and passed him for the lead a lap later. Udell was later assessed a drive-through penalty for incident responsibility and finished sixth.

Stacy, meanwhile, pulled away over the final 15 laps to win by 6.473 seconds over Murry and Jim Cox, with Tyler McQuarrie and Jeff Westphal teaming for third place in the No. 39 CarBahn with Peregrine Racing Audi R8 GT4.

The Aston Martin team claimed its second overall and GS class victory in a span of less than 24 hours despite being forced to make an unexpected additional extra driver change, as Stacy was required to meet IMSA’s minimum drive-time.

“Fortunately, we had another fuel stop to make, so we called an audible and made another driver change,” Marcelli said. “We had a couple little mistakes yesterday, so we knew we had to execute better today.”

“This weekend was huge for us,” Stacy added. “We really felt focused for this weekend and got the car dialed in really well. To be in two victory lanes back to back is awesome.”

Marcelli and Stacy completed 77 laps of the 2.258-mile Mid-Ohio road course in Lexington, Ohio, as the Pilot Challenge wrapped up the weekend. The duo now leads the GS championship standings by seven points over McQuarrie and Westphal.

The Touring Car (TCR) class was dominated most of the race by the No. 77 LA Honda World Honda Civic TCR piloted by Taylor Hagler and Ryan Eversley. But the entry retired with a mechanical issue with 20 minutes remaining, ceding victory to Gavin Ernstone and Jon Morley in the No. 61 Road Shagger Racing Audi RS3 LMS TCR.

When Ernstone handed the car off to Morley, the Audi pairing committed to an aggressive fuel-saving strategy that Morley executed to perfection without needing to make a second stop. He crossed the line 1.557 seconds ahead of Gabby Chaves, who shared the No. 33 Bryan Herta Autosport with Curb-Agajanian Hyundai Veloster N TCR with Ryan Norman. Michael Johnson and Stephen Simpson took third place in the No. 54 JDC-Miller Motorsports Audi RS3 LMS TCR.

“I had a pretty miserable stint and got hit a lot,” reported Ernstone, who won for the second time in 2020 to add to his team’s victory in the 2020 season opener at Daytona International Speedway. “Our pit crew is strong every race, and that’s what it came down to. We ran some numbers and Jon did a fantastic job of fuel saving.”

“We committed to full fuel-saving mode, and I’m so thankful it worked out,” added Morley. “At the end, I tried to go just fast enough to leave a little buffer and go fast for a couple corners if I needed to.”

The next round for the IMSA Michelin Pilot Challenge is during the Motul Petit Le Mans event weekend at Michelin Raceway Road Atlanta, Oct. 15-17. 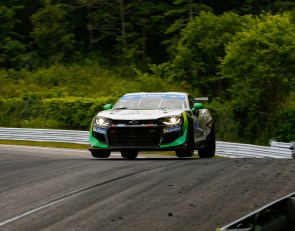 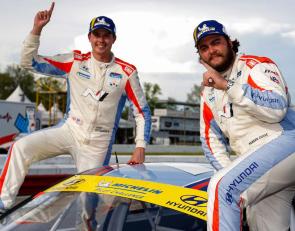 Off Road 15hr ago