David Pepper is the team manager of ThorSport Racing, the longest-tenured team in the Gander RV & Outdoors Truck Series. But Pepper is also a spotter in the Xfinity Series (for Tommy Joe Martins) and in the Cup Series (for Corey LaJoie). He discusses both of those roles on The Racing Writer’s Podcast.

Daly teaming up with Pastrana in NASCAR Trucks 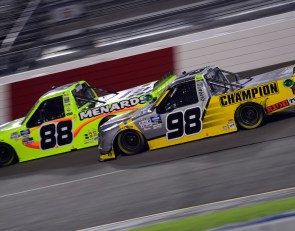 The race is beginning to settle down at Le Mans now after a rather frantic opening 120 minutes. In the third hour the Toyotas continued (…)

The No. 7 Toyota continues to lead the Le Mans 24 Hours, with Mike Conway still at the wheel having had a faultless run thus far. The (…)

The No. 51 Panoz Avezzano of Parker Chase and Roman De Angelis claimed the overall and Silver class victory in Friday afternoon’s Pirelli GT4 (…)