Toyota Gazoo Racing TS050 HYBRIDs scored a comfortable win in a 1-2 finish for the Japanese marque today at Spa, in the first FIA WEC race since February. Jose Maria Lopez, Kamui Kobayashi and Mike Conway didn’t put a foot wrong in changeable conditions, taking the win over the sister No. 8 of Kazuki Nakajima, Sebastien Buemi and Brendon Hartley.

The latter held the lead in the early stages after the race started under safety car conditions due to heavy rain pre-race, making quick work of the pole-sitting Rebellion R-13 which soon fell by the wayside, struggling with tire pressure issues.

The Toyotas ran in formation for almost the entire race following their charge to the lead on the first green flag lap, though it was the No. 7 setting the pace as the No. 8 suffered a loss of hybrid power with Buemi out front in Hour 1. The same software glitch affected Hartley multiple times during his sting, ultimately costing the crew about 40 seconds. They also made an additional stop as the car stayed out on wets with the track drying after the first round of stops, while the No. 7 didn’t. This meant the team brought the car back in for slicks allowing the sister car to take the lead.

“To be honest, the win was unexpected,” Conway said after the race. “We thought we would take P3 because of the Success Handicap. We did a mega job, what we had to do; we didn’t expect to have this one.”

After the No. 8’s problems, the No. 7 went unchallenged, and finished just over 30 seconds ahead. The No. 8 caught back up through multiple safety car periods but had to splash and dash at the very end.

The victory was the No. 7 crew’s third of the year, and Toyota’s fourth, extending the points lead for Conway, Kobayashi and Lopez over their teammates in the No. 8.

Behind, Rebellion’s R-13 completed the podium, the car off the pace all day as the Toyota’s four-wheel drive system proved to be a huge advantage in the changeable conditions. Nevertheless, Rebellion will head to Le Mans confident in the car’s reliability after another strong weekend on that front for the Swiss-flagged crew.

Fourth in class was the returning ByKolles CLM, which ran as high as third after Rebellion was caught on the wrong tires in the opening hour and needed another stop. But the car faded, the team battling with electrical issues throughout before pushing the car into the garage with 38 minutes remaining for repairs to the engine bay. It managed to limp to the line, leaving the team with plenty of work to do before Le Mans.

LMP2, meanwhile, was a thriller. United Autosports took the win, after a strong performance from Paul Di Resta, Phil Hanson and Filipe Albuquerque. It was not a thoroughly dominant run for the British team, as both Racing Team Nederland and Signatech Alpine looked strong, but it did continue a remarkable streak of five straight LMP2 wins in ELMS and WEC competition for Richard Dean’s crew. (The last time United didn’t win an LMP2 race was back in Bahrain at the end of 2019.)

There were challenges throughout, but United’s Autosports ORECA 07 Gibson extended its LMP2 win streak. Image by Motorsport Images

Albuquerque and Hanson, who, unlike Di Resta (who missed Fuji) are full-season drivers, are now 15 points clear of Di Resta in the standings, and 24 points ahead of the Jackie Chan DC Racing pair of Ho-Pin Tung and Will Stevens with two races to go.

The driver of the day across the four classes was clearly RTN’s Giedo van der Garde, who was simply sublime in the opening portion of the race, driving from the very back of the grid to the LMP2 lead in under three hours. Job van Uitert then took the wheel and held onto the lead for the team, but he couldn’t quite build a big enough margin for Frits van Eerd to defend towards the end.

Bronze driver Van Eerd tried hard to keep the hard-charging United ORECA and Alpine at bay, but Di Resta made short work of him at La Source, dropping him to second.

Unfortunately for Signatech, its chances of challenging for the win in the final hour ended abruptly when Thomas Laurent came across Van Eerd in a fight for second. Laurent attempted to take the place up the inside through traffic heading into Blanchimont, but Van Eerd closed the door and sent Laurent onto the grass and spinning into the barriers on driver’s right, destroying the A470. Thankfully Laurent climbed out under his own power, after such a big impact.

It was a hugely disappointing outcome after such a strong run for him and the team which at one point saw Laurent squeeze past Di Resta around the outside through Eau Rouge and up Raidillon before the incident — clearly the move of the day.

“I really didn’t see him. I didn’t know what happened. I came around one lap later and saw that the big crash happened. I was glad to see he was OK. I’m so, so sorry. I hate that it happened,” Van Eerd said after his stint.

The crash ended Alpine’s remarkable run of consecutive points-scoring races which dates back to the 6 Hours of Nurburgring during the 2015 season.

Cool Racing went on to take second, after slowly climbing up the order towards the end with Nicolas Lapierre aboard. Racing Team Nederland would eventually take third after van der Garde climbed back in for the finish and snuck past Mark Patterson’s High Class Racing ORECA after a spin at the Bus Stop with just under 20 minutes remaining.

High Class, after a really strong run through Kenta Yamashita and Anders Fjordbach’s stints would take a strong fourth place, slightly disappointed for missing out on a maiden WEC podium.

GTE Pro was, yet again, a thriller. The racing between the three factories was hard but fair, with all of them in with a chance during this one.

Early on, Aston Martin struggled in the wet, but came into its own as the track became drier and less treacherous. AF Corse held the advantage early, Alessandro Pier Guidi the man to beat in the wettest conditions. Porsche too looked odds on for the win at various points with both 911 RSR 19s.

When all was said and done, it was the No. 92 Porsche that took the victory after a late error by Maxime Martin, the Belgian Aston Martin driver running wide in the No. 97 which allowed Kevin Estre’s Porsched through, into the lead in the final stages.

The No. 97 would then pit at the very end and drop to third anyway, handing second place to the sister ‘Dane Train’ No. 95 Aston Martin – which leads the title race. Nicki Thiim and Marco Sorensen were as rapid as ever, and were able to recover from a puncture early in the race to claim more silverware. They hold a 19-point lead heading into the Le Mans 24 Hours.

It was tight for the final podium place, as Martin exited the pits after the late splash right in front of James Calado’s No. 51 Ferrari and Gianmaria Bruni’s No. 91 Porsche that were scrapping for fourth throughout the final hour. But no moves were made as the three cars couldn’t quite make anything stick.

GTE Am, like Pro, was unpredictable. The Porsche teams as a whole looked strong for much of the contest, as Dempsey Proton, Project 1 and Gulf Racing all spent lengthy stints with their cars in the top three spots.

After the changes of conditions and various caution periods, though, the No. 83 AF Corse Ferrari would emerge the winner, the title leaders coming on strong late, and looking untouchable at times during Nicklas Nielsen’s stints. Previous Am champions Francois Perrodo and Manu Collard were impressive, too, and thoroughly deserved the victory, their first since the season opener at Silverstone last year. It gives them a 12 point lead over the TF Sport Aston in the standings.

Following an up and down race for the No. 77 Dempsey Proton Porsche, Matt Campbell would steer the Porsche to second ahead of the hard charging TF Sport Aston Martin which struggled early in the wet but found speed with the dry track late to score vital points for the team’s title challenge.

Both of Team Project 1’s Porsches finished just off the podium in fourth and fifth, a rather underwhelming outcome after both cars were podium contenders throughout and each spent time in the lead. 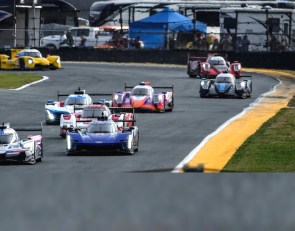 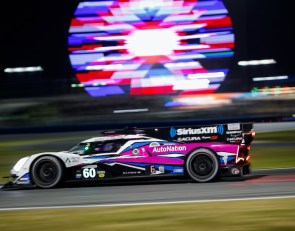