IndyCar has revealed its plan for the final round of the IndyCar iRacing Challenge, to be held on the series’ spiritual home, the Indianapolis Motor Speedway.

The First Responder 175 presented by GMR — last of six rounds of the virtual racing series — will start at 2:30 p.m. ET Saturday, May 2 and be televised live on NBCSN. The 70-lap, 175-mile race will take place on the 2.5-mile oval at IMS, providing a sneak peak of the 104th Indianapolis 500 presented by Gainbridge that was scheduled for Sunday, May 24 but postponed to Sunday, Aug. 23 due to the COVID-19 pandemic.

Watch as @jack_harvey42 takes us around the Racing Capital of the World for an #Indy500 practice lap. Tune in on Saturday to see what he can do at virtual @IMS.

A 33-driver field of NTT IndyCar Series drivers and competitors from other global racing series — just as in the Indianapolis 500 — will take the green flag in the virtual race. Among the “rookies” on the entry list is McLaren Formula 1 racer Lando Norris, who dominated the field in his IndyCar iRacing debut last weekend on the virtual Circuit of The Americas.

Norris, 20, has been sim racing for more than a decade and competes regularly in the virtual world as a member of the elite Team Redline when he’s not racing around the world in F1 for McLaren. Other expected entrants include Supercars star Scott McLaughlin (pictured, below), sim racing veteran and Indy 500 regular Stefan Wilson, IndyCar, F1 and rallycross ace Scott Speed and IndyCar racer RC Enerson, whose Top Gun Racing team hopes to make the jump from virtual to actual IndyCar racing when the series returns to racing.

Kyle Busch, Hinchcliffe, Wickens among those missing the cut for Indy iRacing

A 15-minute qualifying session Friday will set the starting line-up for the First Responder 175 presented by GMR. The fuel window for the 70-lap race is approximately 30 to 35 laps, so strategy could play a big role. Brave drivers and strategists could gamble on enough fuel savings and extended caution laps to reach the checkered flag in one stop, while others may play it safe and benefit from the fresher tires gained from a second stop.

“I think a lot of the drivers are excited to race the IMS oval,” said Sage Karam (pictured leading, top), one of the most experienced sim racers among the IndyCar drivers. “I know that it will be very high intensity. That’s because it’s Indy and it’s the final IndyCar Challenge event. With only 70 laps rather than 200, the drivers will want to qualify well and get to the front pretty quickly. We had a good oval car at MIS and Motegi, but things didn’t go our way. Hopefully, we’ll have another strong car this Saturday. It should be a great race.” 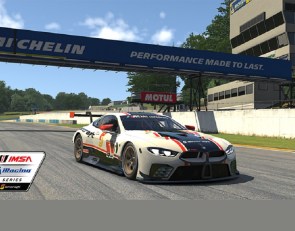 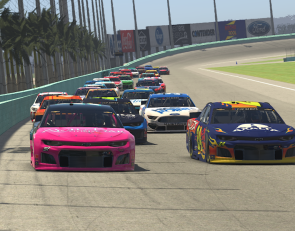 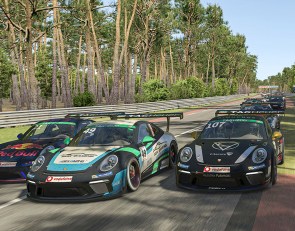