After a couple of oval races, it was back to virtual road courses for the AutoNation IndyCar Challenge at Circuit of The Americas, the fifth of six scheduled rounds in the IndyCar iRacing Challenge Esports series. While the oval rounds had included a couple of NASCAR guest stars, this time the field included Formula 1 driver (and Esports virtuoso) Lando Norris, and Australian SuperCars racer Chaz Mostert. While Mostert was under the radar in his virtual IndyCar debut, Norris was anything but. The 20-year-old Briton was on the pace immediately, claimed a comfortable pole position, and then showed what skill and Esports experience can do in the race, too.

Norris’ lap of 1m43.469s around the virtual 3.4-mile circuit in an Arrow McLaren SP entry was enough to eclipse Team Penske’s Will Power in qualifying. Interestingly, this is the first race in IndyCar’s iRacing series to be run on a track where the aeroscreen-equipped DW12s have logged actual laps, during the official series pre-season test at COTA back in February. There, Power topped times with his Penske Chevy at 1m46.760s, in chilly wintry conditions. So the iRacing times looked pretty representative…

Norris made a clean start to grab the early lead from Power, Chip Ganassi Racing’s Felix Rosenqvist, and another Arrow McLaren man, Pato O’Ward. Norris opened up a comfortable gap before making the first of his two planned pitstops just before the designated “competition caution” on Lap 12 of the 32-lap event.

Power — who admitted he has been putting in 15 hours a week of practice on his sim rig trying to improve his iRacing form – opted to switch to a single-stop strategy and so stayed out and picked up the lead — as did a number of others.

Norris dropped back to sixth at the restart on Lap 15, briefly, before dispatching Scott Dixon for fifth in Turn 1 and Santino Ferrucci later in the same lap. But coming out of the final turn, Norris looped the car on the exit, dropping him about 15s back of Power at the halfway point.

“I was so annoyed…just on the gas a little too quick,” Norris acknowledged later.

Power, though, handed that all back and then some after making his own pitstop on Lap 18, spinning not once but twice on his out lap and dropping halfway down the order.

After his pit stop @12WillPower spins! @PatricioOWard has taken the lead! pic.twitter.com/MmPxuJhlIe

All this put an Arrow McLaren SP entry back in front … but in the hands of O’Ward. Norris though, had forced his way back up to second before the second stop, gaining as much as 1.3s per lap on his teammate.

His second stop left Norris well behind the one-stopping Rosenqvist with eight laps to go. Yet once again the Briton closed the gap quickly, gaining about 0.8s per lap on the Swede, who cycled to the front after the rest of the two-stoppers peeled off. But that lead was only momentary, before Rosenqvist spun out of Turn 2 after clipping the curb. The Ganassi driver nearly collected Norris in the process, but the race’s guest star squeaked past and into a comfortable lead.

O’Ward made it even sweeter for Arrow McLaren SP by blasting past the rattled Rosenqvist for second a few moments later. The “real” Arrow McLaren SP driver closed to within a second of his virtual teammate by the final lap, but Norris had everything under control.

“It was not easy at all … which was all down to myself and obviously the spin in the second stint,” related Norris. “I didn’t think I was going to get back to the lead so I was kind of gutted, but I got the call from my engineer telling me to keep pushing. And then Will spun — that was the key to allowing me to get back to P1.”

Norris, an Esports regular in a variety of series and platforms, reckons all the sim time will serve him well in his day job, whenever it finally restarts.

“I use this a lot to work on my driving and to work with my engineer like I’ve done for the past week on this IndyCar race,” he noted. “I’ve got the best stuff I can to replicate as many things to real life and give me the best feeling of driving a car, which I feel is a benefit in this sad time, with what’s going on. Being able to drive constantly — pretty much every single day — over the past month enables me to keep on top of things, and keep working and progressing.”

“It was good but, man, Lando is quick in the sim!” declared O’Ward. “The whole week we were working really well together as a team to try and improve. I’m proud we were able to get a 1-2.”

Scott McLaughlin had another solid virtual run for Team Penske, trailing Rosenqvist home to take fourth ahead of Santino Ferrucci, while Power recovered from that wild out-lap to take sixth.

IndyCar has announced that rather than the “non-IndyCar dream track” originally scheduled for next week’s series finale, it will instead be an appropriately high-profile sendoff at the Indianapolis Motor Speedway. A field of 33 drivers will race 70 laps (175 miles) on the famous 2.5-mile oval at IMS, home of the Indianapolis 500 presented by Gainbridge.

Full-time IndyCar series teams will be guaranteed entries, along with any Indy 500 winner who has participated in the iRacing Challenge and any race winner in this series. The remaining spots in the field will be filled during a qualifying event Wednesday, April 29. 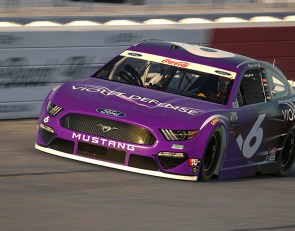