Although the offseason changes to Chip Ganassi Racing’s engineering group are subtle, the moves reveal a wider effort by the team to match and overtake its closest rivals.

Consistency was central to Scott Dixon’s run to fourth in the most recent championship, with 10 podiums and two wins in 2019. But the New Zealander, and his rookie teammate Felix Rosenqvist, struggled to keep pace with Team Penske as its trio of drivers took eight victories – nearly half those on offer – including the Indy 500 on the road to a 1-2 championship finish.

Add in the unyielding presence of Andretti Autosport at the front of the standings, with Alexander Rossi leading the expanded five-car-plus-Meyer-Shank-Racing charge when the 2020 season gets underway, and the Ganassi squad chose the right time to tinker with its engineering structure.

The most significant adjustment comes with the reassignment of Dixon’s championship-winning race engineer Chris Simmons, who moves into a new role as CGR’s director of performance. Having won three titles with Dario Franchitti and two with Dixon at Ganassi since 2009, Simmons’ promotion will see the former Indy Lights racer use his engineering and analysis skills to influence the three-car operation, which now includes Marcus Ericsson, in ways that will produce more formidable results across all of its entries.

“We’ve identified for ourselves areas where we feel our performance really needs a big kick, and so Chris has been working really, really hard within the department structure at our race team from the day after we came back from Laguna Seca in partnership with all the department managers, as well as the people that work in those departments, to try to make ourselves better,” says CGR managing director Mike Hull.

Although Hull wouldn’t be drawn on the specific areas the team is working to improve, Simmons’ skills will be utilized in a manner similar to that of a competition director. He’ll work closely with CGR’s veteran technical director Julian Robertson, who doubles as Rosenqvist’s race engineer on the No. 10 Honda.

“Julian remains in that role,” Hull said. “So, all the engineers would report to him through a pyramiding system. That is, the chassis engineers and the people that support them.”

Almost all of the Ford CGR sports car crew have found new roles within the team’s expanded IndyCar program. Image by Levitt/LAT

As RACER reported last year, CART, Champ Car, and IndyCar race engineer Michael Cannon moved from Dale Coyne Racing to fill Simmons’ void as Dixon’s engineer. And with the shuttering of the CGR-led Ford GT IMSA and WEC program, Brad Goldberg has returned to the IndyCar operation to engineer Ericsson in the No. 8 Honda during his debut season with the team.

“I was actually with Brad on the 67 [Ford GT timing] stand for four years, so [I] certainly understand how far he’s come as an engineer, even in the last four years. Terrific guy,” Hull says. “So he’ll be on the 8 car, Michael on the 9 car and Julian Robertson will be on the 10 car. I think that we revitalized with some active energy with Mike Cannon coming on board. I think that’s really the direction we’re going. Change is good, because what it does is it energizes thinking, and that’s what we’re working on doing within our group.”

Like Goldberg, Ford CGR team manager Mike O’Gara is back with the IndyCar outfit, and will serve as Ericsson’s race strategist.

“I’ll still be on the 9 stand with Chip [Ganassi], Barry Wanser will be on the 10 stand, and Michael O’Gara is going to be on the 8 stand, so I think in the substance of how we do it is still the same,” Hull said.

Staffing the new entry for Ericsson was helped, in part, by reassigning some of the Ford CGR crew members, and according to Hull, all but three have stayed with the team and taken new roles spanning the entire IndyCar effort for 2020.

“A good portion of those people that worked for us on the sports car program over the last four years were all people who had worked for us in IndyCar racing prior to that,” he said.

“So moving them into IndyCar positions is fairly easy. We don’t have a sports car team. Some people think we just moved the sports car people onto the 8 car to run an IndyCar, and that’s not really true. We move people vocationally and strength-wise where we thought they would be best to fit with the 8, 9 and 10 cars, and so that’s what’s happened there.” 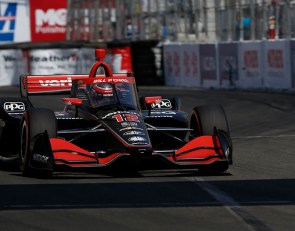 Will Power saluted his team after it scrambled to repair extensive damage to the No.12 Team Penske Chevrolet and get it back out for the (…)