It’s another Listener Q&A episode of The Week In IndyCar show to complement Colton Herta’s guest appearance, all driven by your questions submitted via social media.

The No. 51 Panoz Avezzano of Parker Chase and Roman De Angelis claimed the overall and Silver class victory in Friday afternoon’s Pirelli GT4 (…)

October VRG races at The Glen set to go ahead 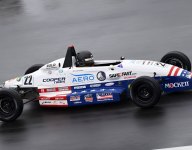 The Team USA Scholarship reaches an important milestone in 2020, celebrating 30 years since Jimmy Vasser was confirmed as the inaugural (…)