It’s another Listener Q&A episode of The Week In IndyCar show to complement Colton Herta’s guest appearance, all driven by your questions submitted via social media. 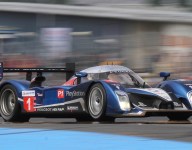 Peugeot 908 LMP1 Tales: All the torque

Ask an ex-Formula 1 driver to offer their impressions of the first car they drove after leaving F1, and be prepared to hear disappointment (…)

The race is beginning to settle down at Le Mans now after a rather frantic opening 120 minutes. In the third hour the Toyotas continued (…)

The No. 7 Toyota continues to lead the Le Mans 24 Hours, with Mike Conway still at the wheel having had a faultless run thus far. The (…)