In contrast, the 2019 effort by automotive visionary Jim Glickenhaus, his son Jesse, and their Scuderia Cameron Glickenhaus has been highly anticipated and publicized. Taking both styling and engineering cues from the iconic Baja Boot, the Glickenhaus Boot is a brand-new production machine, with a racing version soon available to the public. Built in association with California’s Armada Engineering under the watchful eye of Project and Race Manager Darren Skilton, these Boots represent the ultimate in “modern vintage retro-ness”.

Assembled in just 28 days prior to the inaugural 1967 Mexican 1000, Vic Hickey’s Baja Boot was the first true off-road supercar. In an era when Baja race cars could be put together for little more than $400,  with a Meyer’s Manx fiberglass body and an inexpensive stock VW chassis and drivetrain, the Baja Boot cost $78,000 to build. It had a massive 112-inch wheelbase when most of the shortened dune buggies only stretched the measuring tape 84 inches. It weighed 3,450 lbs wet when the Manx cars were lucky to break 1,500 lbs.

The Boot’s Camaro 350 cubic inch engine was mounted amidships, and a large, GM truck radiator was stuck all the way in the rear, cooled by a special six-blade reverse pitch fan. The Boot had four-wheel drive with a Dana transfer case that could drive to the front wheels only, along with four-wheel independent suspension lifted from an Oldsmobile Toronado. It featured four-wheel Hurst-Airheart disc brakes, three separate fuel cells with Goodyear bladders, and special 36-inch tall Goodyear tires that provided an incredible 14 inches of road clearance.

A skunkworks project that mirrored much of General Motors’ closet motorsports mentality in the 1960s, the Baja Boot was funded in large part by George Hurst. The inspiration behind GMs “Trailblazer” and other four-wheel-drive projects, Hickey took an entirely different approach to the Baja challenge by building a truly groundbreaking “unlimited” open wheel car – a vehicle he christened with a memorable name because “the thing just looked like an old boot.”

Hickey’s great creation never won the race for which it was built. Under the guidance of Bud Ekins and co-driver Guy Jones, the car did win the 1969 Baja 500 in June of 1969 – finally earning the right to bear the name Hickey had given it two years before. Hickey built a second Baja Boot in 1968. The tandem pair of cars were run out of his Ventura, Calif., shop when actor/racer Steve McQueen purchased them to race on his own.

Steve McQueen and his Boot.

While one of the boots ended up in Australia, the original car was found by Bob Law and restored in 2000. That car was purchased in 2010 by Glickenhaus at the Bonhams Auction in Monterey for $199,500 – the largest amount ever paid for a historic off-road race car.

Skilton (a highly accomplished racer and promoter of Mexico’s Sonora Rally) and his crew have been testing and refining the Glickenhaus Boots for months now, putting both versions through their paces in Baja and Southern California. The No. 2022 entry will be driven by Skilton, Viry Felix and John Krellwitz. The four-wheel drive competition version carries 22in. of wheel travel powered by a 650 horsepower LT4 lifted from a Chevrolet Corvette Z06 via a race-prepped Turbo 400 automatic and 37in. BFGoodrich KR2 tires.

Both versions will be made available on a very limited basis to enthusiasts, and rumors have surfaced that the planned SCG 2020 model year production run of five two-door models are already spoken for.

Thus, one of this year’s best Baja 1000 narratives somehow came together 50 years after it all started. It will be the might of a factory versus the ingenuity of a small group of passionate enthusiasts. Ford versus Glickenhaus. Stroppe versus Hickey. No matter which machine crosses the Ensenada finish line first, all of motorsports will be a winner in this ultimate Baja match race. 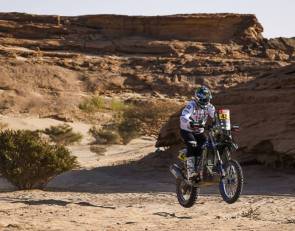