Kimi Raikkonen describes Alfa Romeo’s recent race performances as “nightmares” and wants the team to work out where the pace has gone since the summer break.

Alfa has picked up just three points in total since Formula 1 returned to action with the Belgian Grand Prix at the end of August, courtesy of Antonio Giovinazzi finishing ninth in Italy and 10th in Singapore. Raikkonen had picked up 31 points before the summer shutdown but has not scored since, and after jumping the start in the Russian Grand Prix he says even some good fortune could not help the team get back into the top 10.

“Obviously the (start) was my fault, but in the end we managed to get back in the race with the safety cars and we managed to unlap ourselves, but unfortunately we didn’t have enough speed,” Raikkonen said. “We could just hang in with Toro Rosso and I could pass one guy but basically I passed him because they were fighting against each other and he went wide.

“We have to understand the last four races — they have been nightmares and we need to figure out what’s going wrong and where, clean up and understand things. Out of the last races only Spa did we actually have speed; the rest has been more or less fighting with it.”

While Raikkonen was unhappy about the lack of pace, Giovinazzi didn’t get the chance to chase as third straight point-scoring finish from 12th on the grid as he was caught in the collision between Daniel Ricciardo and Romain Grosjean that ultimately saw the other two cars retire.

“It was definitely not the kind of race I was hoping for but it is what it is,” Giovinazzi said. “I got stuck in the middle between Ricciardo and Grosjean on Lap 1: I don’t know if Daniel knew I had Romain on the outside, but I ended up like in a sandwich. I tried to lift off and avoid contact, but that wasn’t enough and we touched. We’ll need to check if there was any further damage as it was quite a big hit and the car didn’t really feel right afterwards.”

After seeing the appeal for its penalties at the German Grand Prix dismissed, Alfa Romeo sits eighth in the constructors’ championship, seven points clear of Haas in ninth. 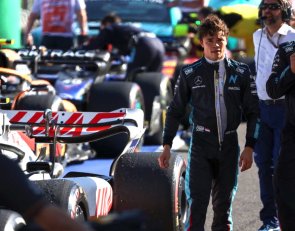