Robert Stout was keenly aware of what needed to happen at WeatherTech Raceway Laguna Seca for him to earn the Battery Tender Global Mazda MX-5 Cup presented by BFGoodrich Tires Championship: He needed to win and his rivals needed to falter. Both conditions were achieved in Race 1.

John Dean II continued his domination of the ND1 class with his 10th win of the season, part of a podium sweep for Sick Sideways Racing. The first woman to stand on a Global Mazda MX-5 Cup podium, Sarah Montgomery, improved on her personal best result by finishing second.

The fight for the Mazda MX-5 Cup Championship has been filled with drama. It began with practice when Championship leader Bryan Ortiz lost a motor and was unable to turn any laps. His Copeland Motorsports team was able to change the engine in time for qualifying, but Ortiz’s main rival, Selin Rollan, qualified on pole for both of Saturday’s races.

Everything was flipped on it’s head on lap two of Race 1, when Rollan, who was running second, slowed to a stop with a broken gearbox. He was officially scored in 25th and earned last-place points.

Stout had taken the lead from Rollan on the opening lap and commenced a long battle with Luke Oxner for the lead. The two exchanged the lead several times before Stout took the lead for good in his No. 28 McCumbee McAleer Racing MX-5 with 16 minutes to go.

From that point the fight for the final two podium positions allowed Stout to pull out a 0.9854s margin of victory.

“I’m just so happy for the team to be able to come back and do this,” Stout said. “It’s easy to say ‘all you have to do is win and someone else needs to be around fifth.’ So, to have the two guys in front of me (in the championship), finish behind me (in the race) it was great. I’m definitely a little more nervous heading into Race 2 this afternoon now. Everyone started sliding around in the back half of the race, but I think I was managing tires better than anyone else around me and I think that benefited me in the end.”

Michael Carter, who briefly led the race, recovered from a trip through the Turn Six gravel trap to finish second in the No. 08 Copeland Motorsports entry. The podium finish locked up the Rookie of the Year Championship for Carter and the $75,000 prize that comes with it.

“I knew my car was fast and I knew that it would hang on and I just went for the lead,” Carter said. “I had a little moment there in Turn Six, but I just focused on making those positions back up. We ended up moving to second. It was such a great race and I just kept smiling. I’m really looking forward to Race 2. I think we officially clinched the Rookie of the Year and it feels pretty good.”

The battle for third went to the final lap with Luke Oxner (No. 77 White Racing) and Drake Kemper (No. 99 Sick Sideways Racing). Despite an impressive sideways slide through the Corkscrew, Kemper managed to claim third with Oxner coming home fourth.

Championship leader Ortiz started seventh in the race, but was unable to make up any ground and finished there in his No. 4 Copeland Motorsports machine. The win for Stout closed the points gap considerably; Ortiz still leads with 235 points, but only by seven over Stout who now has 228 points. The DNF for Rollan puts him 19 points adrift of Ortiz with 216 points. The maximum points that can be scored in the final race is 32.

Dean (No. 16 Sick Sideways Racing) had no trouble collecting his 10th win of the season. Dean has locked up the ND1 Championship and its $100,000 prize.

“Sparky [Nathanial Sparks] was looking good and was getting race-y, but he made a little mistake and you can’t make mistakes at this track or else you are going to fall backwards,” Dean said. “It’s harder in our cars because for Sparky, if he makes a mistake, I still have a draft. So making a small mistake can be a race-ender. I think he ended up having a really good battle with Sarah (Montgomery) and we got a 1-2-3 in our class. I’m just devastated over Selin (Rollan) breaking a transmission, so it’s tough to be too happy with him trying to get a championship and that happening. But I can’t be happier for the rest of the team with a ND1 podium sweep.”

His teammate Sarah Montgomery continued to make MX-5 Cup history by earning her first runner-up finish in the No. 14 Sick Sideways entry. Montgomery became the first woman to stand on an MX-5 Cup podium at Portland where she finished third in both races.

Alex Bachoura was just happy to be at the race track today, let alone earn the Battery Tender® Hard Charger Award. The Texan was stranded by weather in Houston and was unable to take part in practice or qualifying. As a result he started 24th on the grid for Race 1, but picked up 10 positions to finish 15th.

The 2019 Battery Tender Global Mazda MX-5 Cup presented by BFGoodrich Tires Championship will come down to the final race, today at 6:00 p.m. PDT. The race will be streamed live on www.mazdamotorsports.com. 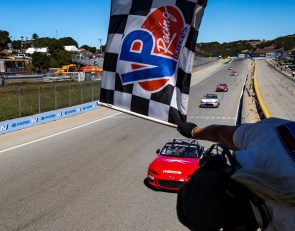 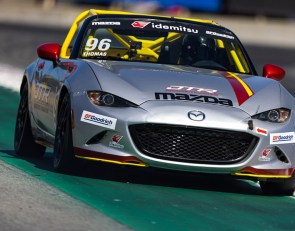