Austin Hill earned his third NASCAR Gander Outdoors Truck Series win of the 2019 season Friday night at Las Vegas Motor Speedway — perhaps his most important victory as it advances him to the second round of the playoffs with big momentum and raised expectations.

“This means the world to me,’’ said Hill, 25, who passed Chastain for the lead with 11 laps remaining and pulled away to the substantial victory margin.

“When I saw the 45 (Chastain) in my sights, we were running close lap times. I changed my line a little bit. And that was a big statement win.’’

Much of the drama and heartbreak in the race happened to the drivers vying for the six positions that advanced to the next round of the Playoffs. Joining Hill in the Round of 6 are Chastain, defending series champion Brett Moffitt, Stewart Friesen, Tyler Ankrum and Matt Crafton.

Moffit faced the least pressure all day because he already transferred to the Round of 6 by winning the Playoffs opener at Bristol.

Chastain wrapped up his transfer spot via points after winning Stage 2.

Friesen carefully nursed his No. 52 Chevrolet to the race finish, posting a 19th-place showing after driving a truck that was down a cylinder and spending substantial stretches of the race on pit road.

Ankrum, an 18-year-old who wasn’t old enough by NASCAR rules to compete in the March Las Vegas race, held on to finish 11th and earn the final playoff position by a mere two-point margin over two-time series champion Johnny Sauter.

Sauter’s teammate Matt Crafton suffered a 30th-place finish, but he had enough of a points cushion coming to Las Vegas that he will advance in the Playoffs as well.

Heading into the Round of 8 finale, Sauter, Crafton and their ThorSport Racing teammate Grant Enfinger were seemingly sure-bets to advance in the playoffs. But before the halfway point of the race, they had their fates decided in unfortunate and unpredictable manners.

It was an especially gut-wrenching early end to Enfinger’s championship hopes. Crowned the series’ regular season champion three races ago, the past Las Vegas winner retired after only seven laps when his No. 98 Ford suffered an engine failure. He took the green flag with two points to the good on making the Round of 6 and only minutes later had his championship hopes deflated with the turn of events.

“It’s just frustrating,’’ Enfinger said. “These guys work their tails off all year. We had a good truck, just wasn’t meant to be.”

Only 33 laps later, Sauter and Crafton suffered their simultaneous race-ending problems. Crafton’s No. 88 Ford had to pull off track and he climbed out as the safety crew arrived.

Sauter was able to drive his truck back to pit road where crew members had to extinguish flames under the hood. The team took it to the garage and although he tried to return to the race for the final stage, his truck’s engine gave out on the first lap of the restart.

Crafton, meanwhile, had to pull his No. 88 ThorSport truck off the track immediately for the safety crew to work on.

“I really thought we had something tonight, but we’ll rebound.’’

The next race is set for Oct. 12 at Talladega Superspeedway. 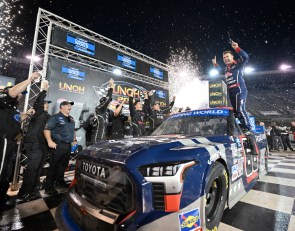 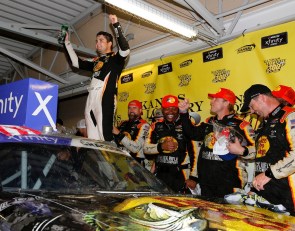