For as much uncertainty as there was for Saturday afternoon’s weather conditions, a victory for Park Place Motorsports in the IMSA Michelin Pilot Challenge Grand Sport class essentially became a lock.

The two-hour race started with clouds overhead and, with just under an hour remaining, the drivers had to begin dealing with a mist that settled in over Mid-Ohio Sports Car Course. It was enough for some teams to make a switch to Michelin’s Pilot Sport GT Rain Tires; others stayed on slicks.

When it was decision-time for the No. 7 Park Place Motorsports Porsche 718 Cayman GT4 Clubsport and its co-drivers Alan Brynjolfsson and Trent Hindman, the team chose the second strategy.

Brynjolfsson handed over the reins to Hindman as the mist began to make its presence known. As several competitors ducked into the pits for wet tires, Hindman, still on slicks, cycled into the lead. The neon yellow, VOLT-sponsored Porsche couldn’t be missed in the fog as it led for the remaining 26 laps of the race.

“At the end of the day with these changing conditions, we kind of expected that there would be quite a few full-course yellows,” said Hindman, who is pulling double duty this weekend between the Pilot Challenge and IMSA WeatherTech SportsCar Championship. “Along with that, just the way everybody else jumped as soon as they saw some rain coming up on the radar, we stayed patient. We definitely analyzed the situation I think a bit further, and that’s ultimately what got us into victory lane. It was just staying calm, looking around and making a call, and not just knee-jerk reactions. I think that’s what got the Park Place Motorsports crew a win today.”

Brynjolfsson, the owner of VOLT, recalled his anxiety watching the radar to see if the mist would turn to rain, and potentially ruin his chance at a second career Pilot Challenge victory.

“This was a classic ‘everything needs to go right’ win,” said Brynjolfsson. “It’s a real team win. When you have this level of competition in IMSA, that’s required.

“Basically, everything happened in our favor,” he added. “We had a great strategy from Mike Johnson with his calls; the car was set up beautifully; and we stayed on the slicks. There was rain all around us with a little pocket of no rain. If that rain had hit, that would have gone against us. Both drivers did great, the car was set up perfect, the strategy went well, and that’s how we got the win.”

TCR: In the TCR class, all eyes were glued to a furious on-course battle through the final 15 minutes of the two-hour event, Hyundai versus Audi as the race neared the end. It was Bryan Herta Autosport’s No. 98 Hyundai Veloster N vs. Audi RS3 LMS entries from Mark Motors Racing and Roadshagger Racing by eEuroparts.com.

Michael Lewis in the No. 98 Hyundai had all he could handle against Remo Ruscitti in the No. 81 Mark Motors Audi, with the two continuously swapping the lead. The No. 61 Roadshagger Audi of Jon Morley lurked in third and was looking to make a move if either one of the top two faltered.

Two moves decided the race, the first coming with less than three minutes remaining. At that point, Lewis slid his Hyundai around Ruscitti into the lead as a GS car blocked the latter. That move solidified Hyundai’s first IMSA win in just its third start for Bryan Herta Autosport, Lewis and co-driver Mark Wilkins.

“I’m so happy I was in this Hyundai Veloster N,” said Lewis. “It was really grippy. I was confident in the car, so the only thing I was thinking about was where to place it because Remo behind me was doing a good job of placing his car in all that traffic. So, I was thinking about each corner ahead and then even a bit further ahead to see where he would time a run. With about two laps to go, I thought I had to make this one move, and if I was going to crash, that was what I had to do to try to win. And if I would’ve crashed … hey, it happens.

“We ended up sticking [the Audi] — I think it was on the outside of Eight or Nine on a Mustang — and got some clear air. Then, in the last corner, another Mustang got in the way, but we were able to get the past and get the win.

“Honestly, it was just pure driving,” Lewis added. “That was touring car racing and multi-class racing at its best.”

The No. 98 team also won the “Spirit of the Race” award presented by Forgeline in conjunction with IMSA Radio.

“It was an amazing day getting the first IMSA win for the team, and the first IMSA win for the Veloster N TCR car,” said team owner Bryan Herta. “What a race to win because I have a lot of history here at Mid-Ohio. I have raced here a lot of years, and I couldn’t think of a better place for it to happen or how it happened. It came down to the very last corner on the very last lap. Our guys were fighting and swapping positions, and I am proud of everybody on the team.”

With Lewis’ pass, Ruscitti was relegated to second and left to battle Morley. Contact with the No. 61 sent Ruscitti spinning into the grass and dropping to fourth. Morley and co-driver Gavin Ernstone were the runners-up.

Ruscitti and co-driver Marco Cirone are part of a newly announced, part-time Pilot Challenge effort for 2019, with their next race coming in June or July.

Rounding out the podium in their best finish to date as rookies were Russell McDonough and Ryan Nash in the No. 12 eEuroparts.com ROWE Racing Audi RS3 LMS.

The next IMSA Michelin Pilot Challenge race will be the Tioga Downs Casino Resort 240 at Watkins Glen International on June 29, the second of two four-hour races on the 2019 schedule.

The television broadcast of the Mid-Ohio Pilot Challenge race will air on Saturday, May 11 at 11 p.m. EDT on NBCSN. 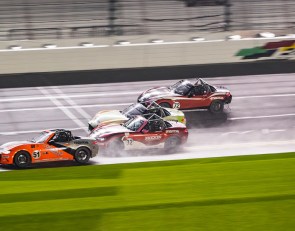 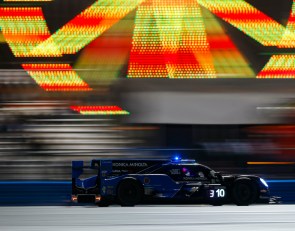 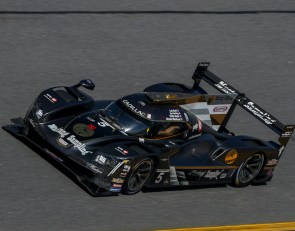