Like the Merle Haggard song proclaims, Colt Nichols truly is an Okie from Muskogee. A high-flying member of the Monster Energy/Yamalube/Star Racing Yamaha outfit, the 2019 AMA 250SX West Region Supercross Series has been a breakthrough tour for the five-year veteran.

Nichols’ first AMA Pro Racing career victory came at rain-lashed Angel Stadium last January, and from there, he went on a run, posting up a series of impressive podium finishes. Some inconsistency and off-song results slowed the Oklahoman at mid-season, but ever since Denver, he’s picked right back up with his top three ways.

Posted up in third in the 250SX West point’s battle, Nichols will look to the curtain-closing round at Sam Boyd Stadium in Las Vegas next Saturday night to not only score another win, but to also roar into the Lucas Oil Pro Motocross Championship in a few weeks’ time tapped out in high gear.

Q: You’ve had a bit of a reprieve since you last raced at Denver?

COLT NICHOLS: Yeah, a little bit. It wasn’t really much of a break as we went pretty heavy into outdoor testing and have tried to log a lot of motos before the new season just to try and be as prepared as possible for when that rolls around. We’ve used the break wisely, and have actually been able to do what we’ve wanted to do. This little break that we had even before the Denver supercross, we’ve just done a lot of testing and a lot of motos and a lot of laps just to try and build up the stamina for outdoors and be as ready as we possibly can.

Q: For a professional racer at your level, is this time of the year difficult as you’re trying to finish up supercross while attempting to get your outdoor program in order? It just seems like juggling both could get distracting.

CN: Yes and no. Whenever you first start riding outdoors it almost seems easier, because you have more flat straightaways and more places where you can catch your breath, and things like that. So you kind of get used to riding outdoors, and then once you go back to supercross, it seems like you’re out of breath a lot more and it takes a little while to get your breathing and timing back. Overall, though, it’s not too bad going back and forth, and I think it can actually be beneficial if you do it the right way.

Q: Do you have a preference between the two disciplines? I know you’ve spoken about your fondness for supercross recently.

CN: I definitely think supercross comes pretty natural to me, and I really enjoy racing under the lights and all that kind of stuff. I think that’s all really cool, and I’ve enjoyed it since I was a little guy – like doing night races at local tracks and stuff. I also really like outdoors, but it’s been tough for me the last few seasons because I was injured and was never able to show my full potential outdoors. I’m actually really, really excited about this year’s outdoor season.

Q: Your 2019 AMA 250SX West Region Supercross Series has been dotted with highs and lows. You won your first supercross race at Anaheim and reeled off four straight podium finishes before some bad luck and inconsistency slowed your progress at San Diego, Atlanta and Seattle. You’re currently third in points. What’s your take on your stadium season?

CN: Overall, I think it’s been good. I’ve been able to check a lot of boxes that I’ve wanted to achieve; there were personal goals of mine I wanted to achieve before the season even started. I was able to go through and check a few of those goals off. For the most part, I think it has been great.

I wanted to be better on my starts. In years previous, I was a horrible starter. This year, I think I’ve started inside the top five a good majority of the time. That’s been a big, big key for me. And winning my first race was awesome. I was able to do that at Anaheim. I wanted to be on the podium at almost every round, and we’ve been able to do that as well. I had the points lead for the first five rounds of the series and that was really cool as well.

And yeah, those three rounds in a row – San Diego, Atlanta and Seattle – were unfortunate for me and really put us back in points. Overall it’s been a pretty successful season so far and we’ve learned a lot and we can apply all of that to next year. I guess that’s about all we can do at this point. Overall, yeah, I’m very happy. We have one more round left and I want to close it off real strong in Vegas and take the momentum going into the outdoors.

Q: It really has been a solid, breakout season for you, hasn’t it?

CN: Yeah, and that was the idea. I really wanted to show people my full potential this season and that I’m a championship guy. Things could have gone a few different directions this year, but things played out the way they did. Adam Cianciarulo and Dylan Ferrandis (ED: Currently first and second in the 250SX West title chase) have been really great this year. I just had a couple rounds where I didn’t execute, and that’s on me. I’ll learn from it. I know what to do now. I’m really looking forward to the Vegas race. If I can kind of get between Adam and Dylan… Dylan is my teammate; maybe I can help him out a little bit. Overall, I just want to there, get a really good start and go out there and ride my own race. I would love to win that race, but overall I just want to go out and be the best me. Whether that’s first, 10th, whatever, I just want to get a good start, try to position myself early in the race and give it hell, and see what happens. 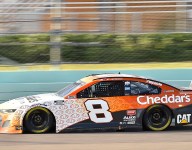