Takuma Sato had the final heroics in a complex qualifying session for the Honda Indy Grand Prix of Alabama. After steadily building speed, the Japanese driver had the right tires (used reds) at the right time to push Rahal Letterman Lanigan teammate Graham Rahal from the top spot in the final seconds with a lap of 1m08.5934s and score his first pole since Pocono 2017. Rahal held on to complete a Team RLL 1-2.

“This is a dream result. We don’t really care which one is first…obviously I care that I’m ahead of Graham!” exulted Sato. “Today we got everything together.”

Sato had been among many to have struggled early in the weekend, crashing lightly Friday on a day that confused many with the apparent lack of performance of the supposedly faster option red tires. But Sato, like the reds, came good when it counted on Saturday.

“Black and red tires had a similar performance yesterday, but today clearly the red tire was faster,” Sato said.

“Today we got everything together,” concluded pole winner Sato. Image by Scott LePage/LAT

Rahal was hardly smiling any less, despite feeling that he threw away pole as he ended up a tenth behind. “I went with the Q2 and the Q1 reds. The Q1 reds had softer fronts than the Q2s, so we wanted to go back to those to see if we could gain a bit of front grip,” he related. “And really, honestly, I threw it away in Turn 5 — I accidentally knocked her down a gear so I hurt myself a little bit.

“But I’m super excited for Takuma — I think this team has done a tremendous job in the off-season. We’ve heard all about how we can’t do it, we’re not competitive, and all this stuff, and it adds fuel to the fire.”

Scott Dixon took third, the reigning IndyCar champ bemused after another up-and-down session saw his NTT Data Honda in the hunt for pole into the final minute, only for his advantage to slip away again.

“I’ve never seen anything like this,” said Dixon. “We tested here in November, the car felt great, we were running 67s. Then you look up and you’re kind of way off the pace, in the 1m08s, 1m09s…but then the whole field is. There’s been a kind of a spanner thrown in the works with the (red) tire being a little off yesterday.

“Today it acted more like usual but the track itself, I think with all these GT cars and different tires, it’s been tough. But hopefully we can pick up a couple of spots.”

After setting the pace through the second and third practice sessions, James Hinchcliffe wound up fourth in the pole shootout. Like Rahal, he felt he had more speed than he showed.

“Yeah, we had more on the reds. I made a mistake in Turn 17. I’m gutted for the guys because the car’s been awesome,” he said. “But we can race from fourth. It’s going to be an interesting race — is it going to be a red race? A black race? I don’t think we actually know yet.”

The uncertainty of the first three practice sessions was reflected in the unusual make-up of the Firestone Fast 6, with this top four joined by Sebastian Bourdais and Spencer Pigot — the only Chevy driver in the shootout.

“I think we had a great shot at pole,” said Pigot, who opted to take his final shot on sticker blacks rather than reds and paid the price. “Throughout Round 1 and Round 2 we were right up there — I think we actually had the fastest lap of the day; just unfortunately it was in Round 1 rather than Round 3! But overall I’m really happy for everyone at Ed Carpenter Racing and Chevy. At the end there, we thought sticker blacks would be the way to go; looking back now it probably wasn’t. But you live and you learn and we’ll give it a shot tomorrow.”

Predictions of bad weather for qualifying proved wide of the mark although Round 1 began with hectic laps from the outset as everyone took the the opportunity to bank laps, mindful of the red flag plague that could cut track time. Group 1 also served as de facto test mules for the second set of drivers as to whether the option red tires — a new batch from Firestone replacing the softer compound from Friday that had proven so perplexingly slower than the blacks — would be back to their accustomed speed advantage. From Group 1, that remained unclear. Ganassi Racing’s Felix Rosenqvist, for example, was well off the pace on his sticker reds and failed to advance, although the Swede still felt that they were the better option and that his problems lay elsewhere.

“I think they (reds) were definitely quicker. There was a little more grip — maybe less than you expect on the reds. But I didn’t feel really any problem; I was just slow,” admitted Rosenqvist, whose teammate Dixon rose to the top in Round 1’s Group 2. “There wasn’t really anything that stood out. Kind of frustrating but this track can be like that so we’ll just have to work on it.”

The Swede had some big-name company after the second group, as two-thirds of Penske’s armada failed to make the cut, Simon Pagenaud and defending champ Josef Newgarden finishing seventh and eighth.

“We haven’t been quick from the beginning and not really sure why,” admitted Newgarden.

Hinchcliffe’s spectacular weekend continued with another last-lap flyer in Round 2 to not only bump his way into the Fast 6 but take over the top spot. In the process he pushed Will Power out, ending the Australian’s streak of poles and leaving Team Penske shut out of the pole shootout.

COTA hero Colton Herta was also on the outside looking in, but the Harding Steinbrenner driver was not too miffed by his ninth-place starting spot: “It’s going to be between a two-stop and a three-stop; I think a lot of guys are going to try two-stopping it, so it will probably be split between the field,” said the rookie. “It’s going to be a really interesting race — you can win from anywhere.”

Speeds remained down from last year (1m07.441s was the pole for Newgarden), with drivers reckoning the abrasive nature of the aging track surface — due to be repaved after this race — was responsible. It’s also likely to make for significant tire degradation in tomorrow’s race — another strategic conundrum to consider. 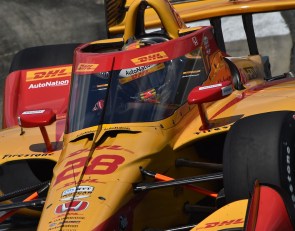