William Byron will start at the rear of the field for the STP 500 at Martinsville after his car failed post-qualifying/pre-race inspection.

Byron’s No. 24 Chevrolet failed mechanical measurements and his qualifying time was disallowed. He was slated to line up sixth. The team will also be among the last ones to select their pit stalls for Sunday afternoon’s race.

NASCAR Cup Series teams took their cars through the inspection process Sunday morning. With Martinsville Speedway being what’s considered an enhanced weekend schedule where teams practiced and qualified Saturday, inspection was held Sunday morning. It served as both post-qualifying and pre-race inspection. Once qualifying was complete and the field was officially set, teams were able to select their pit stalls.

Joey Logano and Aric Almirola will lead the field to the green flag after 2 p.m. ET. 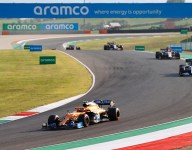