‘We need to do a better job at capitalizing’ - Almirola

‘We need to do a better job at capitalizing’ - Almirola

Aric Almirola broke a 149-race winless streak last year when he returned to victory lane late in the season with his Stewart-Haas Racing team. But now with a year under their belt, Almirola feels one win is no longer good enough. Winning multiple races this season is on the No. 10 team’s agenda.

“I think that’s something Johnny [Klausmeier], my crew chief, and I have looked at and talked about, and even the guys on our team,” said Almirola. “When we look back at 2018 we won Talladega — which was great and fantastic and we did it in a clutch situation to be able to advance into the next round of the playoffs — but we can easily sit back and look at about five or six races that we woulda, shoulda, coulda won but didn’t.

Almirola did indeed have many opportunities before that Talladega race — where he won because of the misfortune of former teammate Kurt Busch, who ran out of fuel on the final lap. Misfortune had been the story of Almirola’s season to that point.

To review some of the notable races: Austin Dillon spun him for the win in the Daytona 500 on the final lap. He led 70 laps in Chicagoland and won the first stage before two loose wheels took him out of contention. Three weeks later in Loudon Almirola was again closing in on a victory when teammate Clint Bowyer brought out an ill-timed caution. In Dover (a week before Talladega), Almirola led 64 laps and was in command with seven laps remaining before a Bowyer caution reset the field.

Almirola thinks he can mix it with the front-runners on a consistent basis. Image by Lesley Ann Miller/LAT.

“When you look at the best teams in the garage — the 18 [Kyle Busch], the 19 [Martin Truex Jr.], the 4 [Kevin Harvick], the Penske cars — when they have cars capable of winning, they win with them,” said Almirola. “And even sometimes when they don’t have cars capable of winning, when they’re a third-, fourth-, fifth-place car they find ways to win, and so that’s one of the things we look at when we look back at last year and that we want to improve going into 2019.

“If we’re dealt five or six opportunities to win races this year, we want to capitalize on more than just one when we look into this season.”

With four top-10 finishes in the first five races, Almirola said his team has started 2019 just as they ended last year. And as the SHR organization works to go from consistent contenders to a group that can challenge and beat those from Joe Gibbs and Team Penske, Almirola believes his group, which is “really in tune with each other,” has already been maximizing weekends.

In recent weeks Almirola has spoken confidently about how it’s “almost our time” and that “we’re going to be serious contenders.” He has already led 69 laps this season and is sixth in the point standings.

Almirola was third in opening practice at Martinsville on Saturday and 14th in final practice. 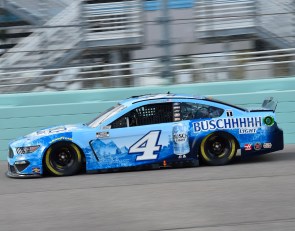