One hour into the 12 Hours of Sebring, Pipo Derani took the lead in the No. 31 Whelen Engineering Cadillac, passing Action Express Racing teammate Felipe Albuquerque in the No. 5 Mustang Sampling Cadillac DPi-V.R on Lap 19 at the end of the hour.

After 19 minutes of green flag racing, Kyle Masson leads LMP2 in the No. 38 ORECA Gibson; Richard Westbrook leads GTLM in the No. 67 Ford GT; and Trent Hindman leads GTD in the No. 86 Acura NSX GT3.

Cadillacs to the fore. Image by Marshall Pruett

The green flag finally waved at 11:22 a.m., after 41 minutes — 12 laps — running behind the pace car under caution due to wet conditions and poor visibility. Dane Cameron took the lead from the pole, but was passed on the outside in Turn 1 by Tristan Nunez in the No. 77 DPi. Albuquerque took second in the No. 5 Cadillac a few turns later. On the next lap, Albuquerque passed Nunez for the lead in the Hairpin. Both GTLM Porsches fell back; the No. 912 of Laurens Vanthoor pitted on Lap 14 for new rain tires, with Pilet pitting the following lap, also for new tires.

Also falling back were both Acura Team Penske entries, to seventh and ninth in class. Pole winner Dane Cameron pitted on lap 16 for new rain tires, with a change of tire pressures.

The race officially got underway at 10:42 a.m. with the waving of the yellow flag. Light rain was falling, with plenty of standing water throughout the 3.74-mile circuit.

Jordan Taylor pitted the No. 10 Konica Minolta Cadillac DPi-V.R, to top off the fuel while the team worked on changing tape and cooling the brake ducts. Taylor also returned to the pits at the end of the both sixth and 10 laps under caution — for fuel only. 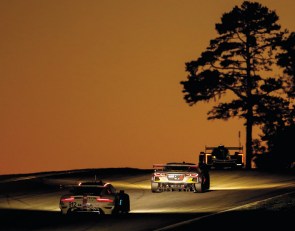 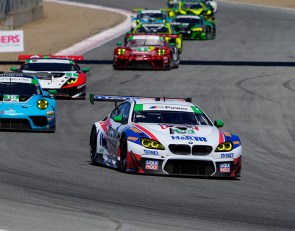 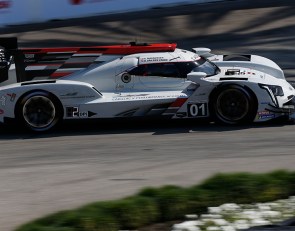